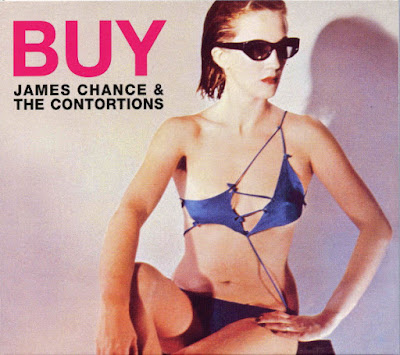 James Chance and The Contortions : Contort Yourself

In March of 1979,  New York no wave artists James Chance and The Contortions released Buy, an album that challenges listeners with its abrasive off kilter funk and a saxophone that can be more grating than Dylan's harmonica. Buy was a critical darling for the few who listened to it enough to give it a thoughtful review ( the Village Voice's Robert Christgau wrote "Bohemias are always beset by ambitious neurotics who hawk their obnoxious afflictions as if they're the future of the species, which is why in theory James White's music is better without the words: you get the jagged rhythms and tonic off-harmonies without being distracted by his "ideas.")

Contemporary critics consider the band influential legends. Pitchfork's Marc Masters says “Contort Yourself” is nihilism you can dance to, and it typified the Contortions’ unique mix of punk, funk, and jazz. That mix would influence many danceable early ’80s New York bands—Bush Tetras, ESG, Liquid Liquid—and point toward the disco scene that eventually took over Manhattan. But no one could replicate the sharp mania of “Contort Yourself,” a song that still twists and shouts.

Labels: 1979, Buy, Contort Yourself, James Chance and the Contortions