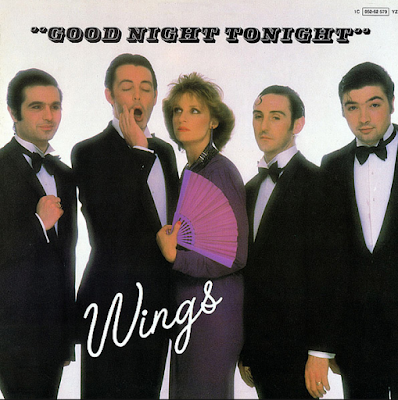 On March 23, 1979 Wings released the new single "Good Night Tonight" b/w "Daytime Nighttime Suffering". It would peak at both U.K. and U.S. #5. Only McCartney could have ever come up with "Goodnight Tonight", featuring his catchiest bass lick since "Silly Love Songs" as well as yet another call back to the days of British music halls. That breakdown with the conga drums and the heavily processed vocals does nothing for me, and unfortunately that part gets extended in the seven minute long 12-inch version. Is it disco? Every bit as much as John Paul Young's "Love Is In the Air", which is to say not so much.

Wings fans will often argue the B side is better. McCartney gave his bandmates the weekend to write a song good enough to back up "Goodnignt Tonight", which would have earned someone a small fortune in royalties. Instead McCartney walked in with "Daytime Nightime Suffering", which has remained one of his favorites.

"That’s a pro-women song,"McCartney told Billboard Magazine. “'What does she get' for all of this? 'Daytime nightime suffering.”'It’s like the plight of women. You were saying about the Beatles stuff and my stuff being very humanistic. And I say that’s what I would be most proud of — as would any artist."