Odds And Sods: I'd Swear There Was Somebody Here, 1971 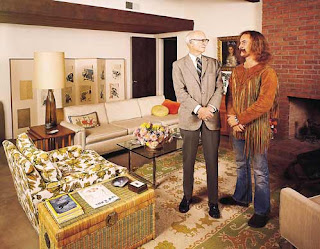 David Crosby and his Dad

[purchase]
The recording of David Crosby's brilliant solo album, If I Could Only Remember My Name, was haunted by the death of his girlfriend Christine Hinton in a 1969 traffic accident. No cut was more eerie--or more haunted-- than the multi-tracked a capella number that closed the record. Producer Stephen Barncard said it was late at night when Croz started "dicking around with the echo."
He recorded Crosby singing with two tracks each pass. 5 passes in all. No overdubs. No retakes at all.
"15 minutes of cosmic skydrop. " Barncard called it. "I had never seen the Muse work so magically."

Labels: 1971, David Crosby, If I Could Only Remember My Name, odds and sods