Geno Washington ( From Indiana, USA) was stationed in England with the US Air Force when guitarist Pete Gage asked him to join his new group.

Geno Washington & The Ram Jam Band had two huge selling albums in the UK during the mid 60's. Both live. Both make you feel like you're surrounded by a young exuberant nearly orgasmic crowd. Just try not to join them when they're chanting "Geno! Geno! Geno!" On the 1966 album Hand Clappin' Foot Stompin' Funky-Butt...Live! they finally relent to their fans' demands and play their Top 40 hit "Michael ( The Lover)". 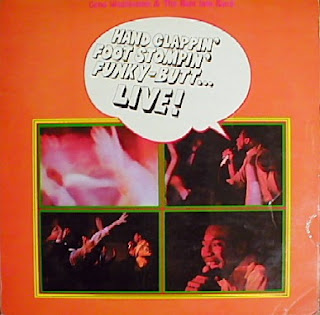 In 1969 The Ram Jam Band broke up. Geno moved back to the US to study hypnosis and meditation. Now in his own late 60's Geno is back in the UK where he's singing in front of fans who never forgot how to chant "Geno! Geno! Geno!"
at 6:52 PM