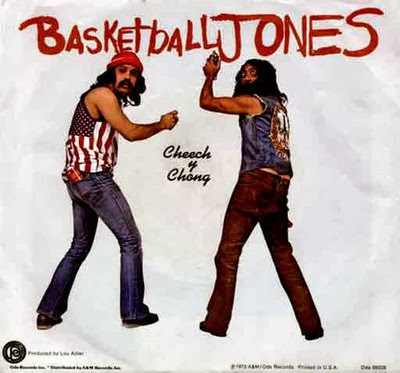 Released in September of 1973, the Cheech and Chong single "Basketball Jones featuring Tyrone Shoelaces" peaked at #15 on the Billboard charts.
Most surprising is the cast of musicians who showed up at the session: George Harrison and Klaus Voorman has been recording next door (with Ringo I wonder?). Carole King showed up to play electric piano while Nicky Hopkins and Billy Preston added their own keyboard flair. While Jim Karsten played drums, the legendary Jim Keltner added percussion. Among "the cheerleaders" were Michelle Phillips, Darlene Love and Ronnie Spector.

The song was actually a parody of The Brighter Side of Darkness hit "Love Jones", which peaked at #16, one spot short of the Cheech and Chong tune.