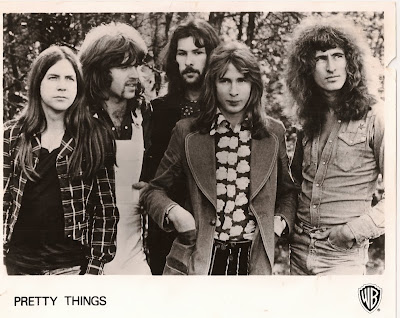 The Pretty Things were raunchier than their contemporaries, The Rolling Stones, before they embraced psychedelia  ( on Emotions ) rock operas ( on S.F. Sorrow) and Side Two of Abbey Road ( on Parachute). But it was the raunchy tag that stuck, thanks to stories of the band brandishing shotguns and setting fire to a passenger jet in flight. That was the act that got the group a lifetime ban from Australia and New Zealand which was still in effect when this interview aired on September 25, 1973 .


Freeway Madness, the band's only record for Warner Brothers,  isn't a great album but it does have some cool songs including the melodic single "Over The Moon" and the hard rocking "Havana Bound".

The interview occurred within week of uber fan David Bowie's Pin Ups release which included two Pretty Things covers:  "Rosalyn" and "Don't Bring Me Down".
at 2:00 AM