40 Year Itch: Life is a Rock But the Radio Rolled Me 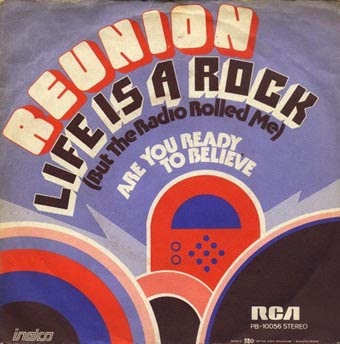 In September of 1974, Reunion, a band made of studio musicians and fronted by Ohio Express singer Joey Levine, released the Top 10 name-checking hit "Life is a Rock ( But the Radio Rolled Me)". Someone went through all the trouble of transcribing the song below.

Ten years later the Fleshtones did something similar at the end of their single " American Beat '84", ( starting at 2:24) I spent several days trying to convince Peter Zaremba he gave a nod to The Osmonds ( at 2:58). He disagreed and he should know. He was the band's singer ...and I was already losing some of the high end of my hearing thanks to far too many nights at the cubs.30 years later, I'm pretty sure it was the Isleys, he was celebrating.