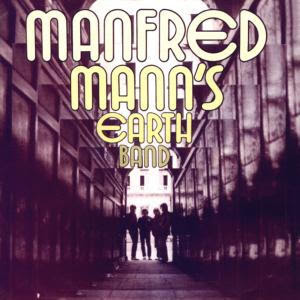 In 1972, the dean of all rock critics, Robert Christgau, gave just three albums his A+ rating: Paul Simon's eponymous album , The Rolling Stones 's Exile On Main Street and this multifarious album by Manfred Mann's Earth Band.
From the beginning Manfred Mann always had a way with choosing covers. Their 1964 #1 hit "Do Wah Diddy Diddy" was originally a minor hit for The Exciters. "If You Gotta Go, Go Now" (UK#2,1965) "Just Like A Woman" (UK#10, 1966) and "Mighty Quinn" (UK#1 and US #10,1968) were all Dylan compositions. "Pretty Flamingo" (UK#1,1966 ) was written by the same guy who wrote The Banana Splits Theme. But all along Mann and his bandmates could knock out some pretty good stuff on their own.
My current obsession is the Beach Boys inspired "Up The Junction", a  follow up single to "Mighty Quinn" that went absolutely nowhere.

When the band Manfred Mann dissolved, Mann himself began fusing jazz with hard rock.
That's a recipe for progressive self indulgence of the worst kind. There's some of that ( "Sloth", "Tribute") but in Mann's hands, the album works wonders for the most part. Gospel meets Deep Purple riffing on "Captain Bobby Scout". Watch as Mann responds to a band mate's "Let's boogie!" with a passionate three minute long Moog synthesiser solo below.


So the album rocks hard in places. But there are also some quiet originals that will break your heart."I'm Up And I'm Leaving" and "Part Time Man" both sound like something Ray Davies probably wishes he wrote.

Finally there are the covers. Dylan's "Please Mrs Henry", Dr John's "Jump Sturdy and Randy Newman's "Living Without You", the highest charting single from the album at #69. As most of us know, Manfred Mann's Earth Band wouldn't make a huge splash on the charts until they discovered Bruce Springsteen. "Blinded By The Light" went #1 in the US in 1976 and "Spirits in the Night" cracked the Top 40 in both the US and UK. But that was years after the Earth Band recorded their best album, a debut Christgau called "the perfect corrective to the willful brightness of boogie optimism."