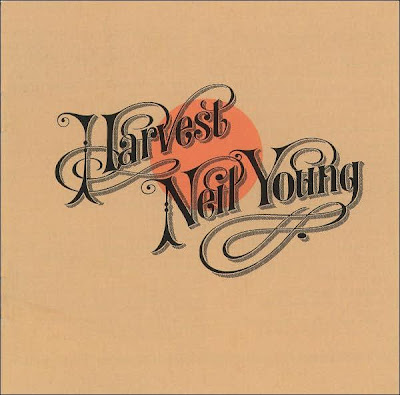 
The download I offered  isn't a tune from Harvest , the best selling album of 1972, or even from Neil Young. I figure anyone who finds their way to this blog has Harvest. The featured track is from Nashville session band Area Code 615. Young wanted the band to back him up for a session or two while he was in Nashville doing The Johnny Cash Show. Only drummer Kenny Buttrey could make it and , as it runs out, he didn't really get a chance to show his stuff. It was Neil's idea to limit him to the "Boom-Boom-Pah" beat on four album tracks: "Heart of Gold", "Old Man", "Alabama" and the opener "Out on the Weekend".

Buttrey: That’s the way he heard it; he wanted [the rhythm] to be felt on the guitar. He dictated everything: bass, drums, all the parts. We improvised a bit on the verses, and I even managed to throw in a little hi-hat here and there, but that was about it. Later, when we were doing ‘Alabama,’ I tried to hit a tom-tom, and Neil stopped the whole thing and really came down on me. I did sneak one in right near the end of the song. I remember thinking, ‘It’s a little too late for him to pull this one out!’"

The fact that Neil was even in Nashville and not bedridden in California was something of a minor miracle.

Anyone who has ever experienced severe back problems knows how debilitating it can be. Neil Young had been in and out of hospitals for the two years between After The Gold Rush and Harvest. As he told Rolling Stone 's Cameron Crowe in 1975:

I have one weak side and all the muscles slipped on me. My discs slipped. I couldn't hold my guitar up. That's why I sat down on my whole solo tour. I couldn't move around too well, so I laid low for a long time on the ranch and just didn't have any contact, you know. I wore a brace. Crosby would come up to see how I was, we'd go for a walk and it took me 45 minutes to get to the studio, which is only 400 yards from the house. I could only stand up four hours a day. I recorded most of Harvest in the brace. That's a lot of the reason it's such a mellow album. I couldn't physically play an electric guitar. "Are You Ready for the Country," "Alabama" and "Words" were all done after I had the operation. The doctors were starting to talk about wheelchairs and shit, so I had some discs removed. But for the most part, I spent two years flat on my back. I had a lot of time to think about what had happened to me.

Neil and the Nashville session musicians ran through the songs quickly, usually no more than three takes.
They recorded master tracks for "Heart of Gold", "Old Man" and several others the first night.

From Songwriter101:
Producer Elliot Mazer: Everyone was within about five feet of each other. There’s some leakage on account of that, but that’s what gave the record such a nice feel. Neil sat on a chair in the doorway between the living room and dining room, because that spot around the doorway had such a nice sound. ( Bassist )Tim (Drummond) and (steel player) Ben (Keith) were to his right, with Kenny on the other side so he could watch Neil’s right arm and get a feel for the backbeat on those songs.


After the telecast the next night, Neil brought back two other performers from the Johnny Cash Show: Linda Ronstadt and  James Taylor. The three of them cut the backing vocals to "Heart of Gold" and "Old Man" from a couch inside the control room. Taylor also added some banjo flourishes to "Old Man".

The Nashville sessions only make up half the album. "A Man Needs A Maid" and "There's A World" were both recorded with The London Symphony Orchestra with arrangements provided by Jack Nitzsche.

His devastating anti-drug number "Needle and the Damage Done", seen here on the above mentioned Johnny Cash Show and inspired by the death of Crazy Horse guitarist Danny Whitten, came from a live performance at UCLA.

The "rockers" of the album ( "Alabama", "Words" and "Are You Ready For The Country?") were recorded in a barn on Young's Northern California ranch.
"Alabama" had some overdubs: a lead guitar line and harmonies from Crosby Stills and Nash.

Mazer tells the story of mixing the album at Young's ranch:

The PA was still out in the barn,and we had those JBL monitors in his house across the way. For a laugh, we ran the left channel into the barn and the right channel to the JBL monitors, then faced the speakers in the direction of Neil, who was sitting in a rowboat in the middle of this small pond that was located directly in front of the house. During the playback I asked Neil through the talk-back how the balance was, and he yelled back, "More barn!"

Harvest spent two weeks at Number One. "Heart of Gold" would top the charts in 1972 before getting bounced by America's Neil Young impression "Horse With No Name". "Old Man" also made the Top 40. But not all critics were impressed. Rolling Stone's John Mendelsohn wrote

(Neil Young)'s seemingly lost sight of what once made his music uniquely compelling and evocative and become just another pretty-singing solo superstar.

Young would eventually revisit the acoustic country arrangements of Harvest in Comes A Time and Harvest Moon. But as he wrote in his liner notes for Decade:

'Heart of Gold' put me in the middle of the road. Traveling there soon became a bore so I headed for the ditch.

That ditch would lead to some of the most exciting and puzzling albums of his career.
at 3:47 AM