Five Mean Years of The Doors

"Interviews are good but...critical essays are really where it's at."
-Jim Morrison, 1967

Longtime Rolling Stone writer Greil Marcus really takes this quote to the extreme, using Doors songs as launching pads for essays that bring up pop artist Richard Hamilton, Thomas Pynchon, Charles Manson, Mildred Pierce, Elvis Presley, Harvey Keitel and Allan Moyle's Pump Up The Volume among many others. Marcus has listened not just to the albums ( dismissing both Waiting for the Sun and Soft Parade as all but unworthy of attention), and seen the Oliver Stone movie ( which he admires)  but he's also studied numerous bootlegs. Read The Doors: A Lifetime of Listening to Five Mean Years [buy it] for the description of Morrison trying to find the willpower to get through "The End" before a heckling Queens,NY crowd in 1968. A year in, and you just knew this band wasn't going to end well. 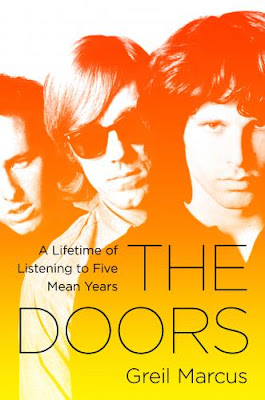 One curious personal note: The first place I ever saw Talking Heads perform is the last place The Doors played: The Warehouse in New Orleans. Some folks are making a documentary about the least glamorous music club in the US
P.S.The BigO Audio archive has recently posted a few Doors bootleg cuts here. One called "Jimbo's Blues" is a spectacular set of live songs from 1970.
at 4:23 AM