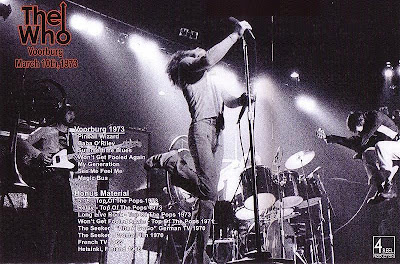 God only knows how they managed to pull it off but on March 9th and 10th of 1973, the Dutch city of Voorburg was the place to be. In a single weekend fans could see Slade, The Eagles, The Faces, both Zombies descendants Colin Blunstone and Argent,JJ Cale, Chi Coltrane, Rory Gallagher, Ry Cooder and The Who perform. The arena was set up with two stages on either side, so as one act performed, crews could break down and set up for the next act. Roxy Music, Ringo Starr and Stevie Wonder were also invited to perform but couldn't make it. Much of the concert is scattered all over YouTube. Some of the samples appear below in the order they performed. ( Yes, Ry Cooder leading into The Who).

COLIN BLUNSTONE "TIME OF THE SEASON"


RORY GALLAGHER "MESSIN WITH THE KID"

RY COODER "JESUS ON THE MAINLINE"

THE WHO "MAGIC BUS"