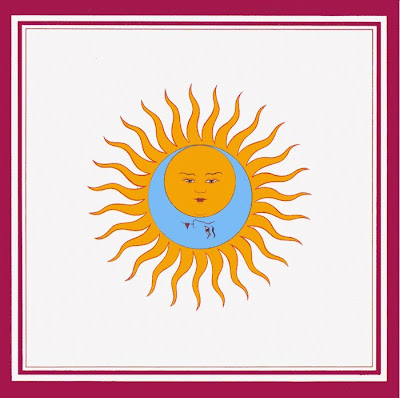 It was the greatest single record release day in 1973. A Friday. The day three mind-blowing albums hit record store shelves: Lark's Tongues in Aspic, the King Crimson album that reinvents progressive rock and For Your Pleasure, Roxy Music's second album and the last to feature Brian Eno. And in England, weeks after the US release, Dark Side of the Moon from Pink Floyd. All challenge the listener. All offer new, often astonishing rewards upon successive encounters.

Before reinventing the King Crimson sound, guitarist Robert Fripp overhauled the band line-up, adding drummer Bill Bruford from Yes, percussionist Jamie Muir, Family bassist/vocalist John Wetton and, of all things, a violinist named David Cross. The band explores some strange sonic terrain on the album, from the tinkling finger cymbals at the beginning to the heavy guitar riffs and violin solos that dominate "Easy Money".
In 1980, Bruford told an interviewer "You know, that was hell, really, to make-because nobody could decide what on earth kind of music we were supposed to be playing anyway."


Many Crimson fans place Larks Tongue second only to In The Court of the Crimson King. The most recent Rolling Stone Album Guide gives the album its highest rating  ( 5 stars), calling Larks Tongue "incandescent, daring and focused".
Dark Side of the Moon has already received the 1001Songs treatment. More on For Your Pleasure later this week.