40 Year Itch : An Album for the Silent Majority 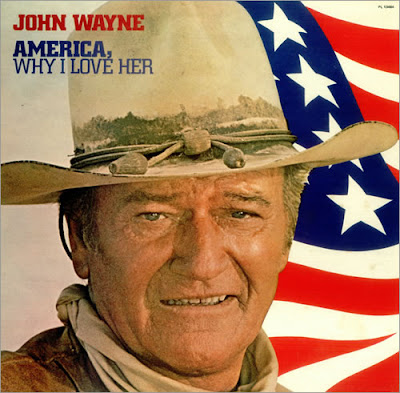 Face the flag son
...and thank God
it's still there
-John Wayne


It is March 1973. The last American soldier leaves Vietnam and the Watergate scandal spreads to indict Nixon's Attorney General John Mitchell. John Wayne, that most fearless of American cowboys, felt it was time to remind the rest of the country that the United States of America was still the greatest of them all.

He recorded America, Why I Love Her in Nashville where an orchestra and chorus backed up his dramatic readings of ten poems written by Robert Mitchum's brother, John. "Why I Love Her" was Wayne's favorite. He read it at the 1964 Republican convention in San Francisco.

The album entered the country charts March 24 and rose to #13. In the harrowing days following 9/11, the album enjoyed a resurgence in popularity.
at 2:00 AM