On January 18, 1974, a day after the release of Court and Spark, Joni Mitchell hit the road for the first time in a couple of years, opening her nine month tour of the US and London at Kiel Auditorium in St. Louis, Missouri. The show began with some jazzy instrumentals from Tom Scott and the LA Express, the session men who played on Court and Spark.

Then Joni came out in a low cut dress. After accepting a bouquet of roses which she placed in a vase onstage, Joni explained they nearly missed the show because of the weather. "There was this strange fog formation, and when we got about ten feet above the ground, we saw it was a highway we were about to land on and not the runway. So we flew back to Cincinnati."

Yes, the pilot actually turned the crazy bird around. 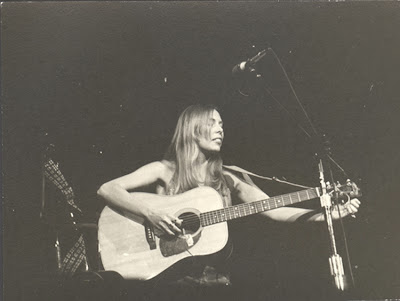 So naturally, she opened with "This Flight Tonight". Then they went into the basic concert set. They played "Free Man in Paris", "You Turn Me On I'm A Radio", "Woodstock",  and "Raised On Robbery" among others.

Among those at the show was Concert Magazine reporter Don Ross:

Vocal communication between the audience and the artist continued all night (Joni encouraged it) and, when the band returned, one person expressed his disapproval - "play without the band!" To some Joni Mitchell freaks, the backup, electric sound came across too heavy for the delicate emotions that flowed through her songs and their souls. And sometimes the arrangements differed on the older material and this displeased them; the last tune before the break was "Woodstock" and it had already been rearranged once by Crosby, Still, Nash and Young. Tom Scott and the L.A. Express set it to a jazzy beat and, while Joni Mitchell felt at home within the flow, it left some people with a feeling of alienation during the intermission. But once the band was given a chance again, "play with the band" issued froth from another part of the audience. 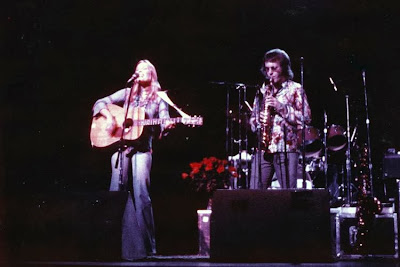 After an intermission, Joni came out by herself to play "Cactus Tree" , "Big Yellow Taxi" and the Court and Spark cut "The Same Situation". Then she sat down with her dulcimer for two Blue cuts : "A Case of You" and "All I Want". Back at the piano she played "Blue" and "For Free" before the band returned for the latest single, "Raised on Robbery", "Trouble Child", "Both Sides Now" and the encore, "Twisted".

It was too soon to know this would be Joni's year. By year's end, she'd have her first Top 10 hit ( "Help Me" ( US#7) and be featured on the cover of Time Magazine. Also, strangely, The New York Times would do a concert review titled "Rock and Roll's Ethel Merman".