Chairman of the Bored 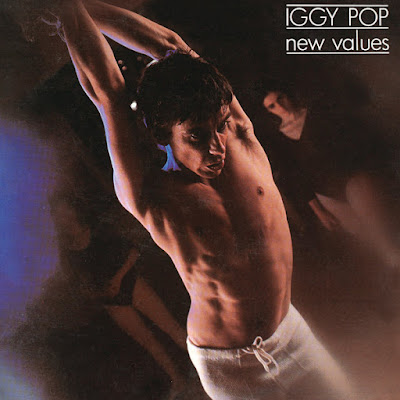 In April of 1979 Iggy Pop released New Values, cited as one of the 13 favorite albums of The Pixies's Frank Black who told The Quietus  "There’s honest admission of frailties and the human condition. It is saying, 'I am the lamest, I am the shortest.' It’s still bravado and fuck you, get out of my way, it’s not just saying I want to fuck you either. He’s trying to say some stuff. It’s not diary rock. When Iggy gets poetic, he’s the best Iggy. "

To be forever compared to the pair of Bowie produced masterpieces that preceded it, New Values shows Iggy teaming up with fellow ex Stooge James Williamson behind the board and touring Stooge Scott Thurston playing most of the instruments. Pop told NME's Nick Kent that the album is really about the things that concern James Osterberg. Things like? Well, first of all, that he's bored. He's the Chairman of the Bored.

And second of all, at Five Foot Seven he is no giant, though he might look like one to someone who is Five Foot One.

I think this might be my favorite Iggy Pop album because we get to hear Iggy Pop unchained from the influences of David Bowie. He's a funny guy."I got a hot-ass pair of shoulders" he sings on the title track. "I love girls," he sings on "Girls", "I like to look at cha." Yes, the song "African Man" is a bad idea especially when he adds monkey chants but the everything else has great energy.

New Values received quite a bit of critical praise finishing #15 in the Village Voice's Pazz and Jop Critics Poll. Robert Christgau gave the album a grade of B+ writing:

This album provides what it advertises only to those who consider Iggy a font of natural wisdom--there are such people, you know. But it does get at least partway over on the strength of a first side that has the casual, hard-assed, funny feel of a good blues session--except that it rocks harder, which ain't bad.

Stereogum ranked the album the 3rd best of the entire Iggy Pop/The Stooges catalogue, ahead of all but Lust For Life and Fun House and calling it "secretly one of the best records of his career".