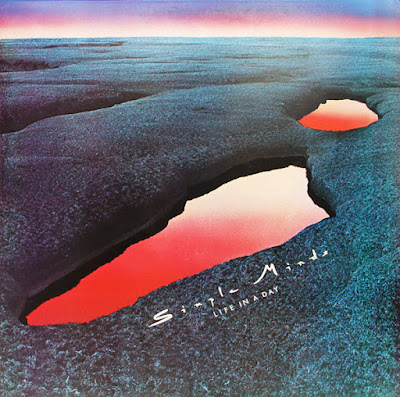 In April of 1979 Simple Minds released their debut album, the derivative Life In a Day. Derivative of what? Magazine, Roxy Music, Japan, Ultravox, Be Bop Deluxe, the list goes on. You could play any of the tracks from this album for a fan of 80's music and they'd probably never guess this is the same band behind the smash hit " Don't You Forget About Me".

In 1981 Simple Minds frontman  Jim Kerr would share his all time favorite songs with Smash Hits:

1 Velvet Underground: Waiting For the Man - Music from the original Factory - America's Premiere journalist.
2 Ike and Tina Turner: Nutbush City Limits - Best ever melting pot where synthesiser shows its soul in solo.
3 Eno: Needle in the Camel's Eye - Not many pieces could live up to the promise of such a title - beautiful and sad.
4 Magazine: The Lights Pours Out of Me - Howard the insect and true star climbs on producer John Leckie's marble wall - best song of the last three years.
5 T Rex:  Get it On - For the saxophone and the cloak full of ego.
6 Neu: Neu 2 (LP)  - Sheer feelings, clear sounds, new musical realities for me. Take it to the hard hinterland.
7 Peter Gabriel: The Intruder - The darker side of Gabriel that maybe does exist. Look into his eyes and you'll see what I mean.
8 Joy Division: Love Will Tear Us Apart - The most uplifting single in a long - long time. It floats around me
9 Iggy Pop and David Bowie: The Idiot - Bass, drums, refrigerator and striplight combine - the offspring is "Baby, baby I like your pants"
10 Talking Heads: Don't Worry About the Government - The building is over there. A mixture of greatness and overpowering admiration for Tina Weymouth. Unworkable and Uncontrollable.