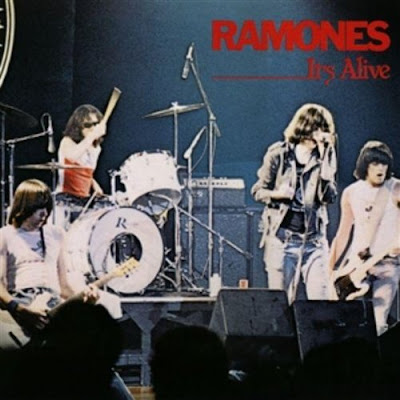 Ramones : I Wanna Be Well

In April of 1979, The Ramones released It's Alive, a double live album consisting of 28 songs in 54 minutes. The recording captures the Ramones at their peak, playing songs from their first three classic albums before a sold out show on New Year's Eve 1977 at London's Rainbow Theatre.

The album was released in the U.K. ( also, Europe, Japan and New Zealand) where the band has scored three Top 40 hits (as opposed to the U.S.  where "Rockaway Beach" would be the band's highest charting single ever at #66). In Smash Hits, reviewer Red Starr named the album the pick of the week, writing

"Despite the live recording now being 18 months old, the Ramones' blissful magic remains entirely undimmed. The atmosphere is tremendous and adds hugely to the 28 favourites crammed into this double album at double speed. "

The album would finally be released on CD in the United States in 1995.

More of the concert here: