Life Is A Pop O' The Cherry 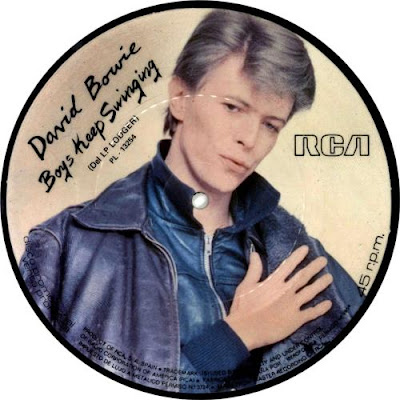 On April 27, 1979 David Bowie released the single "Boys Keep Swinging" b/w "Fantastic Voyage" in the U.K. (though not in the United States). Both are tracks from his forthcoming album Lodger and both feature the same chord progression. The major difference is the band, following a suggestion from Brian Eno's deck of Oblique Strategies cards, swapped instruments. Guitarist Carlos Alomar plays drums and drummer Dennis Davis plays bass. Both are solid musicians, but the best musical moment is the guitar solo by Bowie's touring guitarist Adrian Belew., who may have inspired the song with his endless enthusiasm.  He told Uncut Magazine

"In New York, David was doing vocals for 'Boys Keep Swinging.' He played me it and said: 'This is written after you, in the spirit of you.' I think he saw me as a naïve person who just enjoyed life. I was thrilled with that."

The single peaked at U.K.#7, thanks in part to the video featuring Bowie in drag.

About the song Bowie told Busted Magazine in 2000:

"The glory in that song is ironic. I do not feel that there is anything remotely glorious about being either male or female. I was merely playing on the idea of the colonization of gender."

Is it better to be one or the other?

" That is, in my opinion, an absurd question."