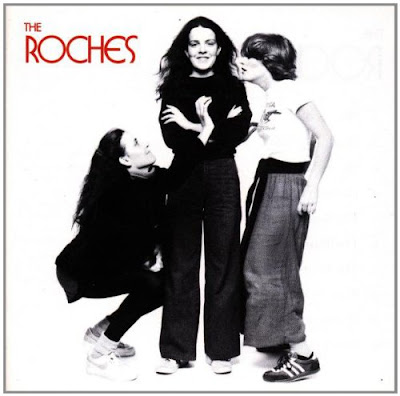 On April 6 1979, The Roches released the self-titled debut album. Produced by Robert Fripp, this is a sparse album that puts the sisters harmonies, their wit and songwriting chops in the spotlight. Fripp recruited some of his King Crimson bandmates to help, but his only memorable involvement comes in the form of a guitar solo on the album's most beautiful track, "Hammond Song".

As the sisters explain in the opening track, "We",  Maggie and Terre has been performing together for ten years ( even adding backing vocals on Paul Simon's There Goes Rhymin' Simon). They recorded Seductive Reasoning in 1975, before sister Suzzy joined them. I've always believed there's magic in the harmonies of singing sisters and this album offers some great examples ( especially "Quitting Time").

The Roches were best appreciated on stage. I caught them in New Orleans in the 80's with my sister who became a lifelong fan. If you've never seen them, you might find their songs too quirky. I gave the album to my friend's wife for her birthday and she only listened to it once as far as I can tell. But back in the day, the critics were taken with the sisters. The album finished #11 in the Village Voice Pazz + Jop poll, whose founder,  Robert Christgau,  gave The Roches a grade of A. He wrote:

Robert Fripp's austere production of this witty, pretty music not only abjures alien instrumentation but also plays up the quirks of the Roches' less-than-commanding voices and acoustic guitars. Thus it underscores their vulnerability and occasional desperation and counteracts their flirtations with the coy and the fey. The result is not a perfect record, but rather one whose imperfections are lovingly mitigated. Replete with memorable melodies, heartbreaking harmonies, wise words, and lotsa laffs. 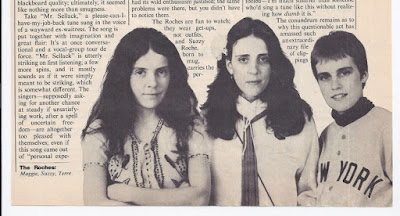 The Roches would team up again with Robert Fripp on their third album, 1982's Keep On Doing, another one I would recommend. They cut a lovely version of "Come Softly To Me" on 1985's Another World. Maggie Roche, the band's best songwriter and humorist; the one who sang pretty and low, passed away in 2017. She was 65.