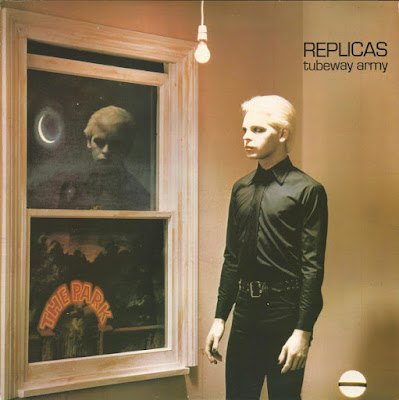 In April of 1979, Tubeway Army released Replicas , a dystopian science fiction themed concept album based on unpublished short stories leader Gary Numan had written. Inspired by Philip K Dick, the stories revolve around Machmen (think the replicants in Blade Runner) and the Grey Men who rule the world. Numan is dressed as a Machman overlooking "The Park" on the cover.

The best known track is the menacing "Are 'Friends" Electric?", the first synthpop hit to top the U.K. charts. Asked by a Guardian reader if he was inspired by Ultravox or any other band blending rock and synthesizers, Numan responded:

I had no idea that any kind of electronic scene existed at all. I don't think any of us did, we were all locked away in little rooms in various cities thinking we were the only people that had discovered synths. We were all wrong and it was just luck that gave me the first big electronic single. Plenty of other people had been doing it before I stumbled along.

I remember the first time I heard "Cars" in the United States. Nothing sounded like it before to my inexperienced ears. In the U.K. I'm sure it was the same thing with "Are Friends Electric?". Not everything is driven by synthesizers. The drums are organic which gives the song a breath of humanity even as Numan sings "You know I hate to ask /But are 'friends' electric?/ Only mine's broke down/ And now I've no one to love"

"The Machman" is a terrific deep cut, more rocker than synthpop. "Me, I Disconnect From You" is the opening track of the album, a clear sign that if you were looking for the warmth of James Taylor and Cat Stevens, you had purchased the wrong record.

Robert Christgau, the dean of rock critics,  gave the album a B+ writing;

Resistant as I am to the new strain of synthesizer punk now reaching us from England, I didn't connect to this for months--not until I listened to the singing. Numan's lyrics abound with aliens and policemen and pickups in what sounds at first like the worst sort of received decadence, but his monotone is too sweet and vulnerable for that impression to stick. To you it may be sordid sex and middlebrow sci-fi; to him it's romance and horror. The debut (Tubeway Army, Beggar's Banquet import) is faster, more pointed, and includes no instrumentals. This is catchier, more haunted, and includes two.