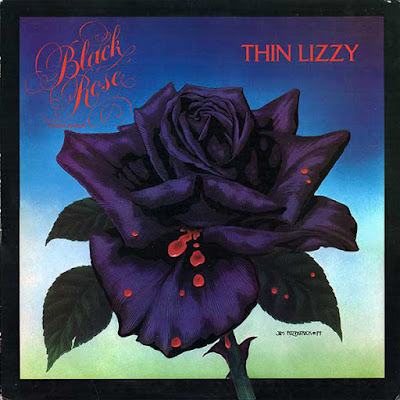 Thin Lizzy : Do Anything You Want To Do

On April 13, 1979 Thin Lizzy released Black Rose : A Rock Legend, one of the year's best albums. Recording in Paris with Tony Visconti producing, this melodic, hard rocking album showcases the guitar theatrics of off and on member Gary Moore. The opening track is "Do Anything You Want To Do", a U.K.#14 hit. The video below is typical of the era, with the band playing in front of a wall wall.

Both Phil Lynott and the other guitarist Scott Gorham were chasing the dragon during sessions, strung out on smack. It's a credit to Visconti and Moore that the album sounds as tight as it does. Fans consider this among their very best releases.

On "Got to Give It Up", Lynott addresses his drug problem.

A casaba is a melon. Yeah, I had to look that up.

Gary Moore couldn't put up with the heroin abuse and walked. he was replaced by future Ultravox lead man Midge Ure.

Labels: 1979, Black Rose, Do Anything You Want To Do, Gary Moore, Phil Lynott, Thin Lizzy