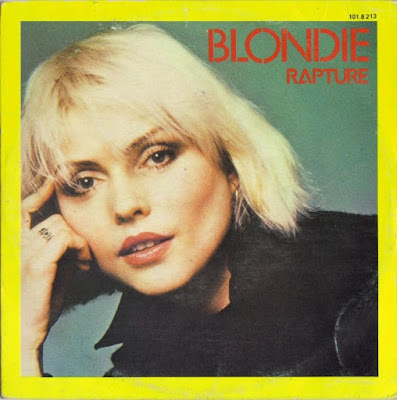 Blondie : Rapture
[Purchase]
On January 12, 1981 Blondie released the US#1/UK#5 hit "Rapture", the first number one song in the United States to feature rap vocals. You'd be forgiven for cringing while Debbie Harry raps about meeting a man from Mars, but at the time rapping was much more playful than it would become.
And you try to run but he's got a gun
And he shoots you dead and he eats your head
And then you're in the man from Mars
You go out at night eatin' cars
You eat Cadillacs, Lincolns too
Mercurys and Subaru
And you don't stop, you keep on eatin' cars
The music video is a work of its art on its own. There's a nod to its disco sound when Harry dances with each member of Blondie. There's also a one-take scene where she raps in a street scene featuring cameos by Fab Five Freddy, graffiti artists Lee Quinones and Jean-Michel Basquiat, choreographer William Barnes ( as the Man from Mars) and a goat. Why was there a goat on the set?
I asked Chris Stein on Twitter. No response. But I'm told the goat's name is Mona and belonged to the woman seen walking her.
at 2:00 AM