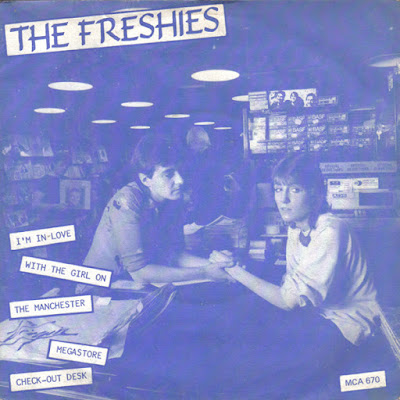 The Freshies : I'm in Love with the Girl on the Manchester Virgin Megastore Check-out Desk
[Purchase]
In January of 1981 The Freshies managed to get their latest single played on the radio, but only after changing the name of the song. Frontman Chris Sievey had been standing outside the Manchester Virgin Megastore with a sandwich board reading "I'm in Love With  The Girl On a "Certain" Manchester Megastore Check Out Desk".  The "Certain" is because the radio wouldn't play a song with an obvious promotional plug. Sievey is also handing letters to customers asking them to pass them on the check-out girl because he wasn't allowed inside. The single peaked at UK#54. 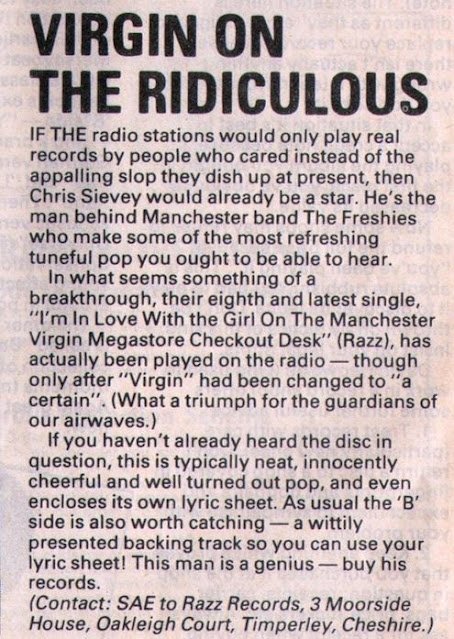 The Freshies broke up in 1982 but the story of Chris Sievey was just beginning. With the help of a paper-mache head he made and a swimmer's nose clip, Sievey became Frank, a nasally comedian, musician and Saturday morning TV host. His story has inspired both documentaries and a film starring Michael Fassbinder.

Labels: 1981, Frank, Frank Seivey, I'm in Love with the Girl on the Manchester Virgin Megastore Check-out Desk, The Freshies