Ultravox's atmospheric "Vienna" is one of 1981's most surprising UK hits 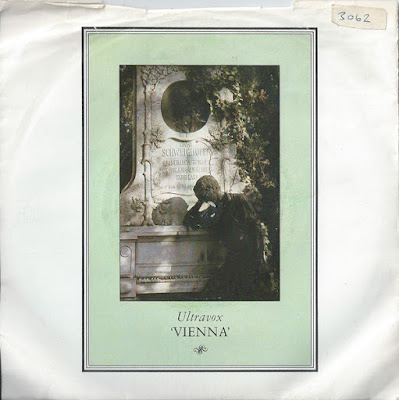 Ultravox : Vienna
[Purchase]
In January of 1981, Ultravox released the UK#2 single "Vienna", produced by krautrock pioneer Conny Plank . The band had been looking to Europe for inspiration and discovered their signature song. Rip It Up And Start Again author Simon Reynolds describes the song in this way:
Ultravox...plunged into full-blown Teutonica with the quasi-classical "Vienna". Wreathed in the sonic equivalent of dry ice, this ludicrously portentous ballad --inspired by a vague notion of a past-its-prime Hapsburg Empire sliding into decadence--reached number two in the U.K. charts in the first weeks of 1981 and hovered there for what seemed like an eternity.
"We weren't trying to write a successful song," Midge Ure told the boys at Sodajerker On Songwriting recently. "We were trying to write a piece of music. So three minute limitations and pop sensibilities had kinda gone out the window. And it sounds like a stupid thing to say after the success that "Vienna" was, but at the time it was so remote, so obscure and such a bizarre thing to even contemplate putting out as a single. Who the hell would play it on the radio? But they did! I think the timing was right. People needed to hear something that was released straight after Christmas and New Year when everyone's fed up hearing Wizzard and Slade and later Band Aid. So they were desperate for something new when it got its chance to be played on the radio , it resonated with people ."
Classically trained Billy Currie was responsible for the music. Chris Cross came up with the bass line and Warren Cann with the drum sound that bring the song into this century. Ure walked into the rehearsal room with the lines "the feeling is gone, only you and I, this means nothing to me".
Though the single may come across as bombastic and bigger than life, it was recorded with a drum machine, a synthesizer bass, a piano, a couple of synth lines and a violin. The listener fills in the atmosphere.
Sadly, the song that blocked Vienna from topping the charts was Joe Dolce's "Shaddup Your Face". Criminal!
at 2:00 AM