The Bongos release "In The Congo" and critics go wild. 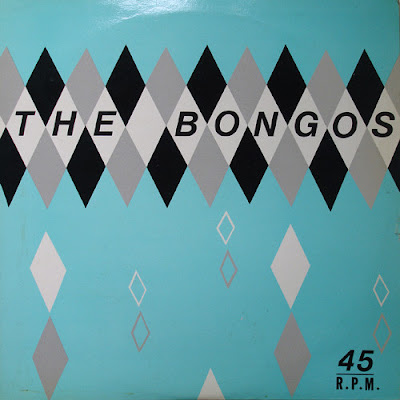 The Bongos : In The Congo
[Purchase]
In January of 1981 The Bongos released a new critically acclaimed three song EP featuring "In The Congo", "Hunting" and a cover of the T.Rex classic, "Mambo Sun". It was produced by fellow Hobokan resident Mark Abel who had produced The Feelies debut in 1980. To  promote the EP, featuring a cover based on one of frontman Richard Barone's vintage shirts, The Bongos made a music video directed by Ed Steinberg.
Here's a rough version I found on YouTube:
In his memoir Frontman, Barone says the lyrics were about his fear of working with major labels:
Natural Enemies/Natural predators
In the Congo, In The Congo
I wanna go back home. I wanna row back home
At the time of its recording Barone was working as an extra on the soap opera As The World Turns. In February he would join The Bush Tetras, The dB's, The Raybeats and The Fleshtones at the Rainbow Theatre in London for a showcase that became the live Stiff Records compilation Start Swimming.
at 2:00 AM