The Passions Are In Love With A German Film Star 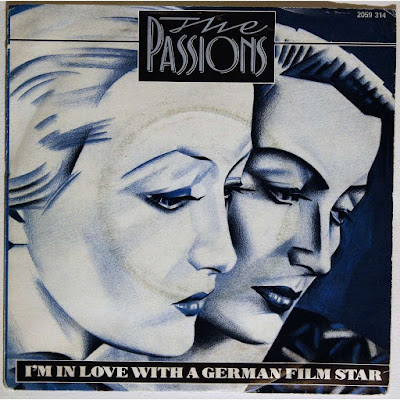 The Passions : I'm In Love With A German Film Star
[Purchase]
In January 1981, The Passions released their only hit, "I'm in Love With a German Film Star". which peaked at UK #25.According to Polydor Records producer Peter Wilson, "It was a song that almost seemed to write itself". The music weeklies declared the song "Single of the Week", and it was named "Peoples Choice" on Capital Radio. This led to the Feb 5 appearance on Top of The Pops. Next came a tour supporting Roxy Music.
From The Passions website:
Bassist David Agar remembers it like this: ‘Clive (Timperley, guitarist)  and I were jamming a three chord idea, more out of boredom than anything. Richard (Williams)  was sitting at his drums smoking, probably worrying about something. Clive and I got bored of playing but Barbara (Gogan, vocalist)  said she liked the chords and to keep on playing. Barbara wrote some words. “I’m in love with a German film star” she said. Richard stopped smoking and looked very excited. “That’s a hit single” he said. That observation gave us the confidence to persevere. The rest of it took about 20 minutes and then we went and had a cup of tea’.
However Barbara remembers that the words to the first verse came into her head while talking to Budgie at the Moonlight Club the previous night, writing them on a scrap of paper in the club’s toilet and then producing it at the rehearsal. The band recorded a John Peel session shortly afterwards, slipping his name into the chorus of the song.
at 2:00 AM