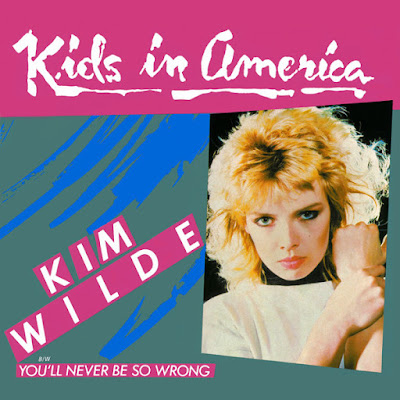 Kim Wilde : Kids In America
THE UK TOP 10 FOR THE WEEK BEGINNING MARCH 22
1. Shakin' Stevens : This Ole House
2. Kim Wilde :  Kids In America
3. Roxy Music : Jealous Guy
4. Toyah : Four From Toyah (EP)
5. Adam & The Ants : Kings of the Wild Frontier
6. Stevie Wonder : Lately
7. Coast To Coast : (Do) The Hucklebuck
8. Teardrop Explodes : Reward
9. The Who : You Better You Bet
10. Tony Caprick & The Carlton Main/Frickly Colliery Band : Capstick Come Home
Kim Wilde's "Kids In America" begins its two week peak at UK#2 behind Shakin Stevens' major smash hit "This Ole House". The song, written by Wilde's brother Ricky and her father Marty,  would peak at US#25 the following year.
In 2012 Kim Wilde's impromptu tube train performance, aided by some alcohol, went viral. "I was with my brother, on my way home after some drinks, and I just started singing," Wilde explained. "When I woke up the next day it'd all kicked off on Twitter and I thought, 'Whatever career I have right now, I probably buried it.' What amazed me was that people thought it was fun and sweet and it's made me realise that the public have more time for me than I thought."
at 12:30 AM