The Misery of FM Rock Radio 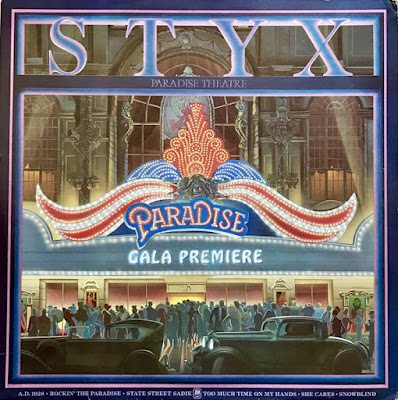 Styx : "The Best of Times"
In March of 1981 FM rock radio made it impossible to escape Paradise Theatre, the most successful album Styx ever made. Top 40 radio was playing the first single, "The Best of Times" to death. It was the #3 song in the land. But FM radio had at least three tracks in rotation. According to FMQB Rock Album weekly report ,an FM radio "tipsheet" , when FM rock stations put the needle down on Paradise Theatre they played "The Best of Times" only 30% of the time. "Rockin' The Paradise" was the second highest choice at 23% and the new single "Too Much Time On My Hands" got 17% of the plays. This happened with a lot of albums. The new Who album split its FM rock airplay between "You Better You Bet" (29%), "Another Tricky Day" (22%) and "You" (19%). This is the reason why Billboard Magazine, the trade mag that told radio programmers what was happening and what to play,  began a new chart this week in 1981: 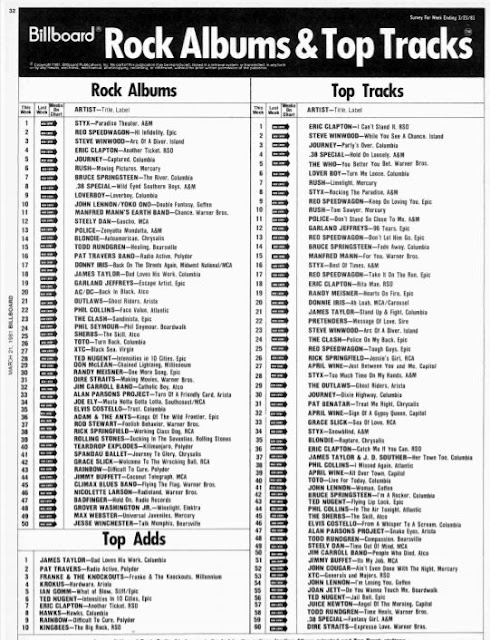 If the chart hurts your eyes I'll just point out there's little here to excite the followers of this blog. It's a wonder anyone in the heartland of America ever heard any XTC, Elvis Costello and The Clash, much less Teardrop Explodes and Spandau Ballet.  To get any airplay they'd have to breakthrough a wall of safer bets like Styx, REO Speedwagon, Steve Winwood, Eric Clapton, and Journey. There was an enormous amount of excitement surrounding the U2 tour at this time, but no radio airplay. And charts like these would only ensure that FM radio programmers would play it safe. Are you really going to play "I Will Follow" when your general manager sees Styx dominating the charts?
1981 would be a miserable year for me. I would spend the second half of the year in Reno, Nevada where the FM rock playlist was as conservative as any in the country. No thanks to a new list in Billboard Magazine.
There's another effect of the new tightened FM radio playlists. Labels began to rely on college radio stations to break their artists. Larry Braverman, national director of college radio for Warner Elektra Atlantic said "It's our only avenue left."
Indeed the 80's would be a banner decade for college radio as I would discover myself in a Tulane University basement beginning in the Summer of '83.
at 2:00 AM