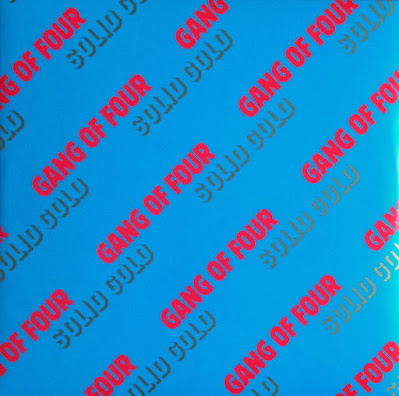 Gang Of Four : What We All Want
On March 1, 1981 Gang of Four released the ironically titled Solid Gold, their follow-up to the ironically titled  Entertainment. It's not half as fun as the debut, but just as influential. How many bands used the dark, echoing martial beat of " What We All Want" as a starting point ?
"Cheeseburger", which kicks off Side Two, is a brash swipe at Americans. In a recent Tim's Twitter Listening Party Jon King told the story :
Andy & I were shooting pool in Barney’s Beanery up from the Trop in Hollywood, winner stays on. A couple of half-drunk truckers take us on, they think they’re all that. Spilling their stories over cold Schlitzes, and, to make the game more interesting, place bets. They weren’t as good as they thought, and it was fun taking their money. Verse one & three are the bollocks I could remember the next day. As someone or other may have said, it's not enough to win, someone else must lose.
Though conspicuously absent from most Best of 1981 polls, Solid Gold finished 7th in Robert Christgau's list of the best albums of 1981. He wrote
Only when a jazz critic uttered the word "harmolodic" in conjunction with this music did I realize why I admired it so. Not for its politics, which unlike some of my more ideological comrades I find suspiciously lacking in charity. And not for its funk, which like some of my more funky comrades I find suspiciously lacking in on-the-one. And certainly not for its melodies. I admire it, and dig it to the nth, for its tensile contradictions, which are mostly a function of sprung harmony, a perfect model for the asynchronous union at the heart of their political (and rhythmic) message. Here Jimmy Douglass's production strategy is to cram everything together. Compare the more spacious versions of the two recorded songs on their 1980 EP, and dig those to the nth as well.
Solid Gold peaked at #52 on the UK album charts and at #190 in the US, where it was finally released in May.
at 12:30 AM