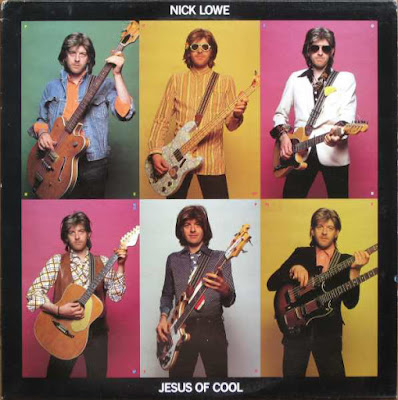 In March of 1978, Nick Lowe released a marvelous collection of inspired, bashed out, pure pop songs called Jesus of Cool. One of punk's premier producers ( responsible for knocking out albums by The Damned, Elvis Costello and Graham Parker), Lowe was also the first artist to release a single on the Stiff Records label. "So It Goes" and its B side "Heart of the City" are here.  So is "I Love the Sound of Breaking Glass",  Lowe's biggest hit single, released a month earlier.

What's most impressive about Lowe is his ability to change musical styles, something reflected by the album cover with five different pictures of Lowe and one of pal Dave Edmunds. Consider the deep cut, "Nutted By Reality", which sounds like a Jackson 5 cover before suddenly turning a page and sounding like a poppy Paul McCartney hit. This album is too much fun and proved to worth pulling from of the shelves every time I had a radio show at college. 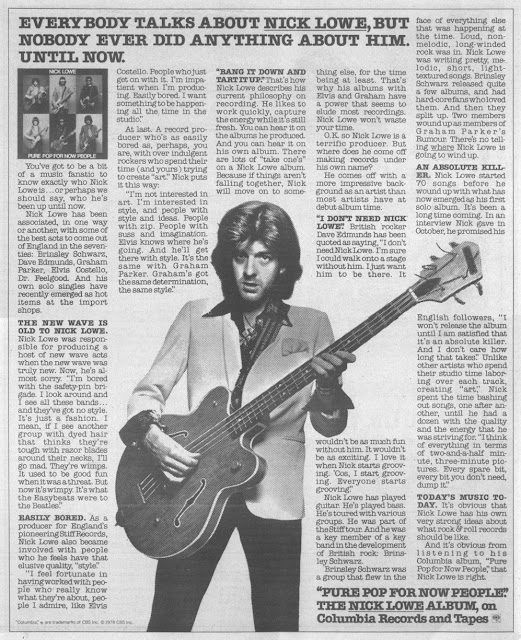 Nick Lowe, the man who produces Elvis Costello and Graham Parker, is a rising deity on the English pop front. But as you might guess from the title of this LP and its English equivalent (The Jesus of Cool), Lowe replaces Costello's nerved-up sneer with a snicker, and Pure Pop for Now People is a catalog of socko production effects held together with one-shot jokes.

Though much of the music is addictive and winning in the myriad fashions of the Bay City Rollers, Wings, Thin Lizzy or even the latter-day David Bowie, the cover photos give fair warning that what you're holding is a novelty record, an admiring vivisection of other people's hit singles. And the rush of industry-trend seismographers to kiss off punk rock in time to champion Lowe as the messiah of "power pop" shouldn't fool anyone about this album's importance, which is slight.


Nick Lowe first came into earshot as a member of the seminal Brinsley Schwarz band; on Pure Pop for Now People, Lowe's "Heart of the City," with its machine-gun drumming and an unremitting guitar riffs from Dave Edmunds, is two quick minutes of the feverish pub rock that won him his nickname of "Basher."

Women, in Lowe's droogishly satirical cosmography, are "meat" -- figuratively in "Heart of the City" and literally in "Marie Provost," the melodic and macabre tale of a decomposing silent-film star who is snacked on by her pet dachshund in a Hollywood hotel.

While Lowe affects to be astounded by the crassness of showbiz -- "The Called It Rock" and "Music for Money" are diatribes against the music business -- he comes off the wall of his alienation so hard and fast that we can only guess at his humanity, not always feel it.


Like most parody/tributes, this record teases with approximations. "(I Love the Sound of) Breaking Glass," for example, yokes its nearly breathtaking attractiveness to a hollow chattiness that finds refuge in sarcasm. Nick Lowe surely has the sit to know that pop-drenched disaffection is a dead end, but it'll be interesting to watch him as he tours America, playing the pawn in the kind of sales schemes he rails against. We might even get to see where his heart is.

From Robert Christgau's A rated review :

This is an amazing pop tour-de-force demonstrating that if the music is cute enough the words can be any old non-cliche. Lowe's people cut off their right arms, castrate Castro, love the sound of breaking glass, roam with alligators in the heart of the city, and go to see the Bay City Rollers. But because the hooks cascade so deftly, I care about every one of them. As for Lowe, this Inspirational Verse: "She was a winner/Who became a doggie's dinner/She never meant that much to me.