Some Kinds of Pride 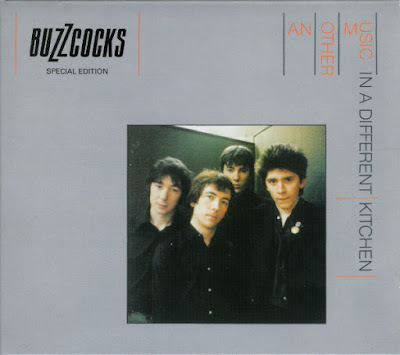 Buzzcocks : Moving Away From The Pulsebeat

On March 10, 1978 The Buzzcocks released their debut album, Another Music in a Different Kitchen. The Manchester quartet has  often been heralded as one of the era's great singles band, which is why their compilation,  Singles Going Steady, is  an essential album in any rock fan's collection. But digging deeper into their albums is also quite rewarding, especially their first one.

Recording at Olympic Studios, the band was in high spirits as they recorded songs they'd been playing live for months.

"What you hear is what we did," guitarist Steve Diggle tells Mojo. "But (producer Martin Rushent)  was great to work with. We'd record three backing tracks for each song, choose the best, and there was none of this 'We'll get it right in the mix' attitude. It wasn't overproduced yet it still sounded unique."

Among the three minute hook-filled songs about relationships and fast cars, there's a seven minute percussive number called "Moving Away from the Pulsebeat"  that may be anticipating Adam and the Ants and Bow Wow Wow.

The UK#55 single "I Don't Mind" and "Autonomy" would both wind up on Singles Going Steady.

Naturally, all of us in the US missed out on The Buzzcocks, but 40 years later we can finally get on board. This is a definitive band that burned bright and burned fast. Three albums in 18 months!

Labels: 1978, Another Music in a Different Kitchen, Buzzcocks, Moving Away From The Pulsebeat