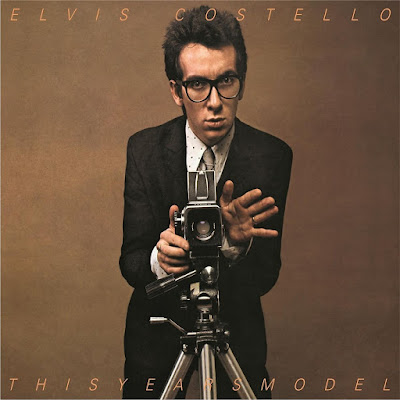 On March 17, 1978 Elvis Costello released his second album, This Year's Model. It would be selected as the best album of the year by the Village Voice Pazz and Jop Critics Poll, topping releases by Nick Lowe, The Rolling Stones, Talking Heads and the Clash.

To these ears, This Year's Model is a dramatic departure from the straight ahead pub rock of My Aim Is True. And I'm frankly surprised that Costello doesn't share songwriting credit with the musicians who helped him invent this sound, The Attractions. Listen to Steve Nieve's keyboards  on "The Beat", Bruce Thomas's bass on "Pump It Up" and Pete Thomas's drums on "Lipstick Vogue".  Could Costello have really brought this much life to songs with a guitar and a cassette player?

This is a tight, punchy band who brought road tested into London's Eden Studios where they bashed out the album in eleven days. Costello is snarling. His lyrics are bitter takes on romantic angst. If you had to pick one Elvis Costello album to own, this would be it. 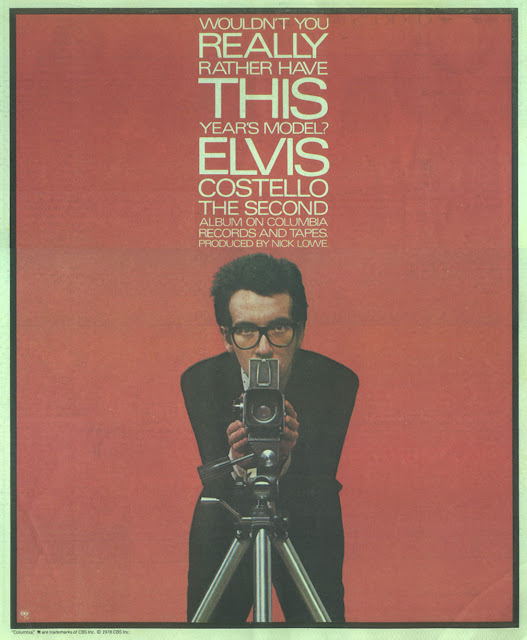 A few other takes.

Anyone who thinks it's uninfluenced ( by punk)  should compare the bite and drive of the backup here to the well-played studio pub-rock of his debut and ask themselves how come he now sounds as angry as he says he feels. I find his snarl more attractively musically and verbally than all his melodic and lyrical tricks, and while I still wish he liked girls more, at least I'm ready to believe he's had some bad luck.

This Year's Model is the most "punk" of Costello's records -- not in any I-hate-the-cops sense but in his emotionally explosive writing ("No Action," "Lipstick Vogue," "Pump It Up") and the Attractions' vicious gallop (particularly the psycho-circus organ playing of Steve Nieve). Many of the songs rattle with sexual paranoia, but the broadside against vanilla-pop broadcasting, "Radio, Radio" (a U.K. single added to the original U.S. vinyl LP), better reflects the general, righteous indignation of the album: Costello vs. the world. And Costello wins.

From  Paul Stokes's 1001Albums You Must Hear Before You Die:

Uncompromising and vicious, This Year's Model is no meaningless rant. It cuts deeply, and tellingly, straight to the bone. Revenge and guilt might scare off other songwriters, but among the anger and disgust Costello finds his truth.
at 2:00 AM