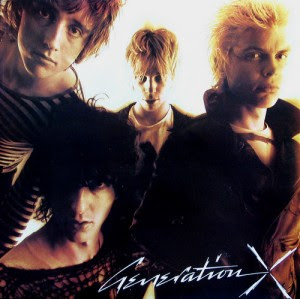 On March 17, 1978 punk rock's most unabashedly commercial band, Generation X, led by the peroxide bleached Billy Idol released their debut album. The cover shot is by Gered Mankowitz, who was also responsible for The Rolling Stones's Between The Buttons. Here was a punk band that actually admitted they loved The Beatles and The Stones.

Outside of the U.K. #47 single, "Ready Steady Go", and the six minute Bob "Derwood" Andrews guitar raver, "Youth Youth Youth", that closes the album I'm not hearing how this record wound up on the Village Voice's Pazz and Jop Critics Poll that year ( albeit at #29 out of 30 ).

One more Generation X album would follow before Idol released an EP that predicted a solo career was next. It's title: Dancing With Myself.

Robert Christgau gave the album a B+ grade, writing:

This band's notorious commitment to pop is evident mostly in surprising harmonies and song structures--musically, they're not trying to be cute. And although as singles "Your Generation," "Ready Steady Go," and "Wild Youth" never knocked my socks off, they're the nucleus of a tough, consistent, inventive album. Who said punk rock was dead?