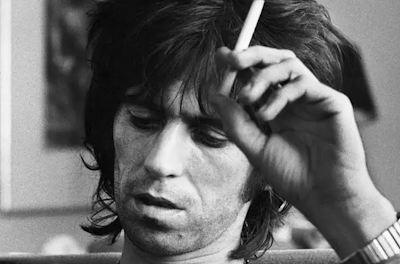 On October 24, 1978 Keith Richards showed the world he wasn't just another drug addict, when a Canadian judge gave him a one-year suspended sentence and placed Richards on a year’s probation after he pled guilty to a reduced charge of possession of heroin. Charges of possession of cocaine and possession of heroin with intent to traffic, which could have resulted in a life sentence for Richards. The judge also ordered Richards to continue treatment for his heroin addiction and that he perform a benefit concert — by himself or with a group — for Toronto’s Canadian National Institute for the Blind within six months.

Looking back on the verdict, Richards writes in Life that he had a blind angel in his corner, Rita Bedard.

Despite her blindness, she hitchhiked to our shows. The chick was absolutely fearless. I'd heard about her backstage, and the idea of her thumbing in the  darkness was too much for me. I hooked her up with the truck drivers, made sure she got a safe lift and made sure she got fed. And when I was busted, she actually found her way to the judge's house and told him this story. And this is how he arrived at the concert for the blind. The love and devotion of people like Rita is something that still amazes me. So aha! A way was found.