Bound For Moving On 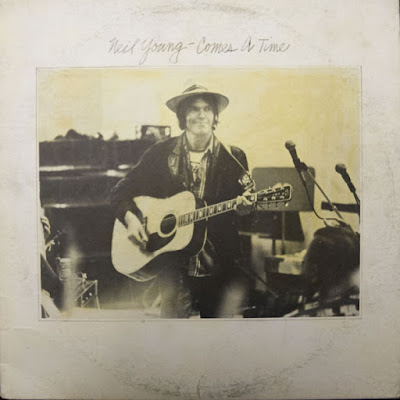 On October 2, 1978 Neil Young released Comes A Time, an album that reminded many listeners of his acoustic gems Harvest and After the Gold Rush. I've always found it to be one of Young's least interesting albums of his career. It was also a troubled recording. Young recorded the album in six studios with four producers and dozens of musicians, including Crazy Horse on "Lotta Love" and "Look Out For My Love". Young was so disappointed in the sound he purchased 200,000 copies which he used as shingles for a barn roof.

The album finished #8 in the Village Voice Pazz and Jop critics poll. Some loved the album. Some did not.

Comes a Time was one of Robert Christgau's Top 5 favorite albums of the year. He  gave the album a grade of A, writing

In which the old folkie seeks out his real roots, in folkiedom. Not only is this almost always quiet, usually acoustic and drumless, but it finishes off which a chestnut from the songbook of Ian and Sylvia -- not just folkies, but Canadian folkies. Conceptually and musically, it's a tour de force. Occasionally you do wonder why this thirty-two-year-old hasn't learned more about Long-Term Relationships, but the spare, good-natured assurance of the singing and playing deepens the more egregious homilies and transforms good sense into wisdom. The melodies don't hurt, either -- Young hasn't put together so many winners since After the Gold Rush. Now that it's been done right, maybe all those other guys will hang up their Martins and enroll in bartending school. Greil Marcus, writing for Rolling Stone, was not so impressed :

New Musical Express recently carried an item noting that Neil Young has been awarded a gold record solely for the number of test pressings he’d racked up for Comes a Time — well, you never know. As with so many other Young productions, Comes a Time was less released than drawn out. I seem to remember hearing radio ads for it last spring, though since no one was sure of the title at that time (Gone with the Wind was on the boards for a while), the snatches of song were simply announced as from “The New Neil Young Album.” I lost count of how many times Young was reported to have rejected the vinyl Warner Communications had in mind, or how many changes the cover art suffered before Young settled on an ordinary Huckleberry Neil photo for the front and a paste-on sheet of titles for the back. And that’s not even to mention what the four producers (including Young) and ten engineers presumably went through. It must have taken forever to get the sound unbalanced properly.

All of which insures a certain disappointment — in this case — because Comes a Time is neither a knockout punch like last year’s American Stars ‘n Bars nor a wildly idiosyncratic, cracked triumph/disaster like Zuma or On the Beach. A restrained and modest set of love songs that traces a long affair from first light to final regrets, Comes a Time is an unsurprisingly “personal,” “sensitive” singer/songwriter’s offering, more like After the Gold Rush or Harvest than any other Young LP — though without most of the cloying innocence of those two enormously popular records. It’s a pleasing, clearly commercial piece of work that’s defended from slickness by Young’s insistence on playing out of tune, skewing the levels of the vocals (Nicolette Larson is sometimes given a true screech) and singing without much affectation. Comes a Time isn’t deep, it’s not threatening, and Young can’t have intended it to be: he can dive deeply and make his threats stick when he wants to. Rather, the album is meant to be straight and honest — folkish, like Young’s small-club “World Tour” at the Boarding House in San Francisco last May. The clatter and clash of Young’s best music (from “Cowgirl in the Sand” to “Like a Hurricane”), the jagged, rearing emotion that explodes even out of the messy rehearsal tapes for “Alabama” and “Words” (released on Journey through the Past) is missing, or muted.

The music doesn’t press; it’s comfortable. There’s a moment halfway through “Look Out for My Love” when the guitar turns into a fiddle and the passion rises like an omen — but it’s a moment, no more. “In the field of opportunity/It’s plowing time again” are fabulous lines — I laughed out loud when a friend quoted them to me a few months ago — but here Young has taken the glee out of them. Their ribaldry is muffled by a hokey hillbilly arrangement, and what should have been an outrageous double-entendre just sounds contrived when Young refuses to stick to his musical concept, singing “plowing” instead of the “plowin'” his country mode is begging for. The LP includes a traditional amount of traditional Neil Young sappiness, as when he wonders why the world spinning ’round doesn’t make the trees fall down.

Comes a Time comes across despite all this, partly because we know Young never has and never will make a record without glaring flaws (think of the endless “Will to Love” on American Stars ‘n Bars), and because the dose of personality it contains is bracing. Young long ago gave up trying to sing “right”; his last real attempt to do so (Neil Young, his first solo album) is made up of better songs than is Comes a Time. But it sounds stiff and emotionally compromised by comparison. Here, even on the more standard compositions, his voice wars with the facelessness of the material: it breaks, surges, drops back on itself. If at first the new LP seems all smooth surface, Young’s voice cracks that surface and carries you through the tale he’s telling, even warning at one point that he’ll soon be boring you, yet never making good on that promise. When Neil Young closes out his story with Ian Tyson’s “Four Strong Winds,” there’s a real sense of time having passed, of choices made and chances blown: the wistfulness of Tyson’s song doesn’t survive Young’s refusal to cater to its prettiness.


It’s still pretty — Meat Loaf could sing “Four Strong Winds” and it’d probably still be pretty — but it’s also knocked off the pedestal that has always been part of the tune’s package. Young sings as if he’s talking to a real person, not as if he’s engaging in a precious reverie with himself. The unpleasantness — i.e., the utter conventionality — of the composition falls away, and the pressed-flower poetry of the chorus dissolves into something like plain talk. I found myself thinking of Bob Dylan’s “If You See Her, Say Hello” and “Shelter from the Storm.”


For all its clichés, though, “Four Strong Winds” stands out here because it’s a carefully crafted song, crafted to stick in your mind, and Young’s own songs on Comes a Time aren’t and don’t. They’re incidents on an album and they work as such, but dropped onto other records, they’d be forgettable. (Save for “Field of Opportunity,” which, despite all I’ve said against its performance, is just too neat an idea to fade from memory.) There’s a dogged retreat from musical intensity on the new disc: nothing to match the chorus of “Helpless” or the shivery hesitations of “Tonight’s the Night.” The terrible drama of Young’s guitar — a quality, based in the ancient modal figures of mountain music, that always suggests dread and courage — is present only in snatches and distant echoes. It’s those echoes that save Comes a Time from the little-boy-lost conceits of Harvest and After the Gold Rush, and the fact that they’re no more than echoes may make this LP just as commercially potent. If so, commercial success will continue to give Neil Young the freedom he has fought for, won, used and stood up to better than any rock n roller of the decade.
at 2:00 AM