By The Meat Factory Door 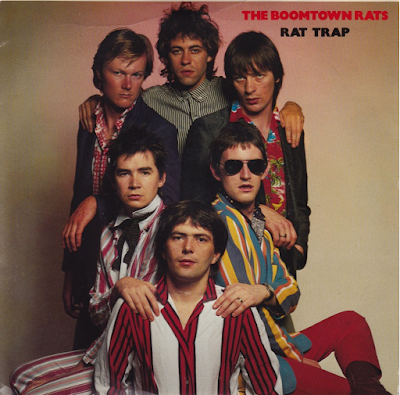 In October of 1978 The Boomtown Rats released "Rat Trap", the first new wave single to top the UK pop charts, dethroning John Travolta and Olivia Newton John's "Summer Nights" after their seven week stand. Bob Geldof says the song was inspired by a friend he met in an Irish slaughterhouse. To critics who said the tune sounded an awful lot like something Bruce Springsteen might have recorded with the E Street Band, Geldof said “Bruce Springsteen couldn’t write a song as good as this, even if he tried.”

Yeah,  he was a bit of an ass before he decided to try to save the world.

The week the song hit #1, the band played Top of the Pops ( name checked in "Rat Trap") and began the number by tearing up pictures of Travolta and Newton John. Then Geldof pretended to play the candelabra as he explained in his autobiography.

"The Musicians' Union had forbidden me to play saxophone on the video, as obviously I hadn't done so on the record. But I saw a candelabra on the piano at the shoot and I put a mouthpiece in the central candle holder and played it. The impact of video came home when during the next few British gigs kids pulled out candelabras from nowhere and began playing them during the sax solo in 'Rat Trap'"