Sickness In Our Hair 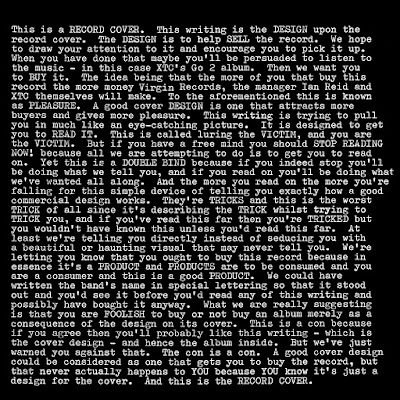 On October 6, 1978, less than ten months since they released their debut,  XTC put out Go 2. Though just as herky and jerky as White Music, this would not wind up being  the "go to" album for most XTC fans. Still, many critics adored the album including Dave Schulps of Trouser Press who celebrated the band's experimentation:

Go 2 pretty much abandons, or more to the point, obscures the obvious commercial elements present on White Music to concentrate on the less accessible side of XTC (a point hammered home by the exclusion of their latest single, "Are You Receiving Me?" from the LP). The result is a sometimes jarring, sometimes beautiful, sometimes annoyingly calculated and mechanical collection of songs, or rather, sounds (because they seem more important than the actual songs) that consistently challenge a listener to react to both its differences from and its underlying similarities to most other rock music.

The Village Voice's Robert Christgau was less impressed, giving the album a B- grade:

Last time they were calling it white music, this time they've released a dub version, and what can you call that except au courant? Or here's another one. It's Andy Partridge who puts the pop in their art-pop, right? If you can tell me whether his "Mecanik Dancing" is pro or con, I'll prove to you that his "Life Is Good in the Greenhouse" means it

Among the band's fans: Brian Eno who is reputed to have said XTC is the only band he could imagine joining. He was in discussions to produce Go 2.

"Brian Eno had been contacted to produce our second album,", Andy Partridge says. " We met him, he came to a few concerts, but he explained to us that we did not need anybody. I think he emphasized what we had in mind but that our modesty prevented us from saying. In the beginning, we had thought it would have been a great honour to work with someone like Brian Eno, very innovative, with good taste, who ploughs his furrow, as farmers say."

Eno gets a nod in ""Battery Brides (Andy Paints Brian)".

But the song I prefer is the Colin Moulding penned deep cut "Buzzcity Talking". Melodic enough to anticipate the wonderful direction XTC would be taking.