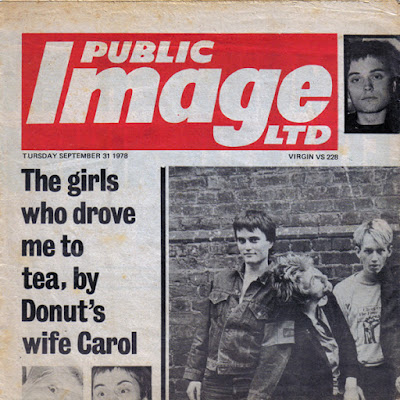 On October 13, 1978, the day after Sid Vicious had been arrested for the murder of Nancy Spungen, Johnny Rotten's new band, Public Image LTD released their debut single "Public Image". It begins with the lines"You never listen to a word that I said, you only seen me for the clothes that I wear, or did the interest go so much deeper it must have been the colour of my hair... "

Lydon had written the song while he was still in the Sex Pistols. Now he was in a band with former Clash guitarist Keith Levene, inexperienced bassist Jah Wobble and,  for a short time,  Canadian drummer Jim Walker.

"the freest moment, like escaping the trap of the Pistols at a stroke...I wanted to declare where we stood in the world, and 'Don't be judging me by the publicity machine and all that nonsense that I had to put up with the Pistols'."

This bit was important: 'I'm not the same as when I began/ And I will not be treated as property'. It's just saying 'Who are you telling me what is and what isn't? You can wither pay attention or you can get stuck in that hole in the ground that you've all buried yourselves in. Well, put the soil over the top. Goodbye."

PiL signed an eight album deal. The single peaked at UK#9 and ranked #2 on NME's list of the best singles of the year.  As one fan of the record said "Everything on U2's first three albums has its roots in this song."
at 2:00 AM