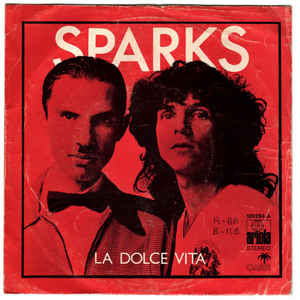 In February of 1979, Sparks released their newest single "La Dolce Vita", the addictive result of a stunning partnership with the Italian disco music producer Giorgio Moroder. Whereas Rod Stewart, KISS, The Beach Boys, The Grateful Dead and Wings would jump on the disco bandwagon and embarrass themselves, Sparks and Morodor give birth to a new synth-disco sound that sounds timeless to these ears. The single gave us a preview of No 1 In Heaven, one of the finest albums of 1979. In March of this year, Sparks is releasing a lavish double CD and double vinyl edition of the album featuring bonus songs.

Of the album, Ron Mael has recently said “The most thrilling albums to make are those where you go in not having much of a clue what you’re doing or where you’re going, and where, at least once every thirty minutes, you ask yourself, ‘Is this what it means to commit both artistic and commercial suicide?’ That was the case with the 'No.1 In Heaven' album.”