The Only Way To Feel The Noise 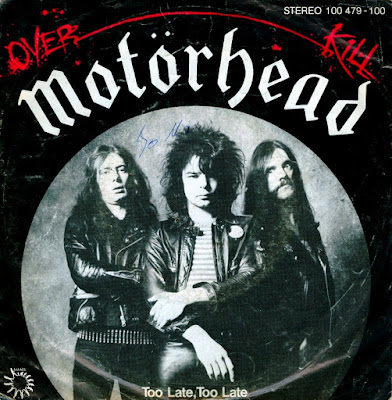 "Overkill to me is like a 757 just flying like five feet over your head. There's so much power."
-Robert Trujillo , Metallica

In February of 1979, Motörhead released the U.K. Top 40 hit "OverKill",  the title track from the first of two albums they would make this year. Produced by Jimmy Miller (Exile on Main Street, Traffic), Overkill finds the power trio getting their classic speed metal sound together. In the documentary The Guts and the Glory, drummer Phil "Philthy Animal" Taylor tells how he inspired the sound of the single when Lemmy and "Fast" Eddie Clarke walked in on him trying to play his double bass drum set up as fast as he could.

I always wanted to play two bass drums but I always said to myself, 'No, I'm not gonna be one of these wankers who goes on stage and has two bass drums and never even fuckin' plays 'em'. Not until I can play 'em. So I got this other bass drum and I used to get to rehearsals a couple of hours before the other guys and just practice, you know, just sit there going (mimes kicking with both feet) like running, or something like that...I was actually playing that riff, just trying to get my coordination right, when Eddie and Lemmy walked in, and I was just about to stop and they went, 'No, don't stop! Keep going!'...And that was how Overkill got written.