Valentino's In A Cold Sweat 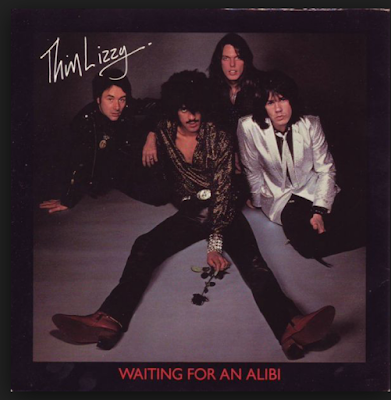 Thin Lizzy : Waiting For An Alibi

On March 1, 1979 Thin Lizzy performed their new single "Waiting For an Alibi" on Top of the Pops. Gary Moore, the band's on again off again guitarist,  is one of the double duellists out in front. He'd pack it up for good in July of 1979 to be replaced by Midge Ure ( yes, the future Ultravox front man). The lead off single from the upcoming Black Rose, "Waiting For an Alibi" is the third highest charting single in the band's history, peaking at U.K.#9.

If singer/bassist Phil Lynott looks a bit under the weather it's because he and guitarist Scott Gorham were both full blown heroin addicts. Black Rose producer Tony Visconti tells The Irish Times:

'I had to be the sober one. It was like being a designated driver. The thing with Phil was that he was visibly dying. During the recording of the last album, Black Rose, his complexion was ashen. There were a few days when he couldn’t even get out of bed. I had more than one chat with him about this. It is very hard to tell one of your peers that they are doing it too much, when you do a bit yourself. You don’t want to come across as a hypocrite. I tried to reach out to Phil, but like a lot of people who have an addiction problem, he said, ‘Don’t worry, I’ve got it under control.’ Thin Lizzy were probably the greatest rock band I ever worked with.”