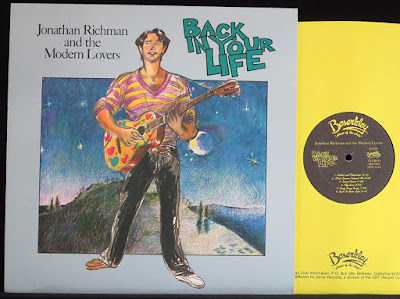 Jonathan Richman and the Modern Lovers : Back in Your Life

In February of 1979 Jonathan Richman and the Modern Lovers released Back In Your Life, an album that combined hauntingly sad love songs ("Back in Your Life", "Affection")  and tunes that might appeal to very little  children ("Buzz Buzz Buzz", "I'm Nature's Mosquito". Naturally, most critics were confounded.

Some thought Richman was a musical kind of Benjamin Button, relapsing into kiddie music about mosquitos and dinosaurs and ice cream men and leprechauns because he was too precious for a modern world full of Van Halens and Sex Pistols and disco queens and new wave bands.

Lester Bangs saw something else : “Only one in 20,000 has the nervy genius of Iggy ( Pop) or Jonathan and is willing to sing about his adolescent hangups in a manner so painfully honest as to embarrass the piss out of half the audience.”

From Robert Christgau a B+ grade for the album and the following praise :

I'd say this is great kiddie music--lotsa innocence, lotsa animal songs, even a snot joke. But kiddies seem to prefer Donna Summer. So put him down as an original and wonder yet again just how much that counts for.

When the album failed to sell in substantial numbers Jonathan Richman disbanded the Modern Lovers and moved to a small town in Maine for several years. He'd sometimes make appearances at Barbara Doyle's restaurant in Belfast. The lost years are recapped in this well written article on popula.com.

In 1983 Jonathan Richman and the Modern Lovers would return with Jonathan Sings! Sire Records sent Richman on tour where he would stop at college radio stations like mine in New Orleans. I got my copy of his new album autographed and saw him perform at Jimmy's but perhaps that's a story for another day.

Labels: 1979, Back in your Life, Jonathan Richman and the Modern Lovers