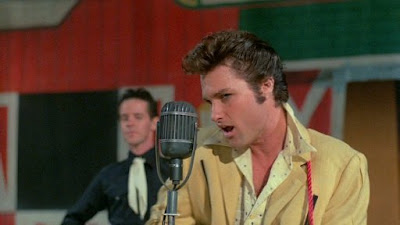 On February 11, 1979, sixteen years after he met Elvis Presley on the set of It Happened at the World's Fair, his film debut, Kurt Russell starred as the The King in the highly rated ABC television movie "Elvis". It was directed by John Carpenter the year after his slasher film, "Halloween", had become one of the highest earning independent movies in history. This would be the first biopic ever made about Elvis.

"In dealing with Elvis, I'm bringing a lot of my own feelings to it and how I feel about him and how I interpret his life and in that sense I think its a personal film because I really love Elvis a lot. Ive always been a fan for him and I love his music," Carpenter said.

Russell would receive an Emmy nomination for his role. The singing was done by Ronnie McDowell, best known for his 1977 song "The King Is Gone", a tribute to Elvis Presley, who had recently died . Another fun fact: Russell married Season Hubley, the actress who played Priscilla Presley a month later. She is seen at the 2:42 mark in the clip below.

In 2001, Russell would again don the sequin suits to play an Elvis impersonator in the poorly received "3000 Miles to Graceland".