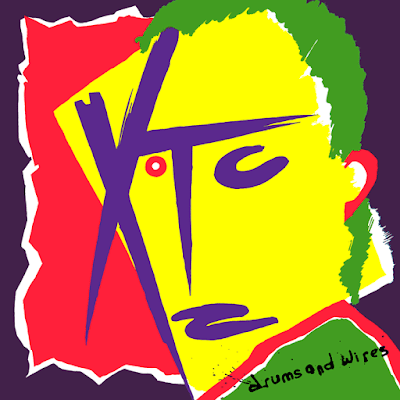 XTC : When You're Near Me I Have Difficulty

On August 17, 1979 XTC released Drums and Wires, an extraordinary album that combines the band's eclectic new wave sound with a surprising talent for melody that only had been hinted at in earlier recordings. The  album marks the debut of guitarist Dave Gregory who replaced keyboardist Barry Andrews who would join Iggy Pop's tour, then League of Gentlemen with Robert Fripp before forming Shriekback.

Red Starr of Smash Hits kicked off his contemporaneous review with the line "This record is so-o-o-o good--a small classic from Britain's most underrated band".

What the hell. Let's read the rest:

As clever as ever and just as tuneful, humorous and powerful, but slower and more subdued in mood. Two guitarists/no keyboard XTC are also more sophisticated and experimental so this may take longer to penetrate but it is wonderful. Packaging also contains all XTC's vinyl lyrics ever, and early copies also get a free unreleased single. Nuff said--get it. Best trax: "Making Planes for Nigel", "Helicopter" and most of the rest. ( 9 out of 10).

When it was suggested that Drums and Wires is commercial enough to be considered a sell-out, drummer Terry Chambers responded :

When a group gets signed by a record company they have to be a bit fashionable or a little bit 'next year's thing', otherwise the record company won't touch 'em. If you just stick like that ... if, you don't progress with the times, then you become a bit of a dinosaur. Like Budgie or something.

And from Colin Moulding, who wrote the hit single above:

We just have this basic need to be interesting, but not to be so different as to be out of the game. We're trying to do things that are interesting to ourselves; things with a bit of a tune, a bit of melody. Just...interesting.

On a personal note, this is the first XTC album I ever bought. I must have heard "Ten Feet Tall" on my college radio station before I started DJ-ing there. I love the whole thing.

Labels: 1979, Drums and Wires, When You're Near Me I Have Difficulty, XTC