You May Call Me Bobby 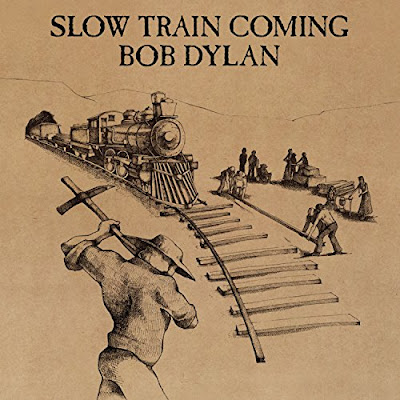 On August 20, 1979 Bob Dylan stunned the music world by releasing his born-again Christian album, Slow Train Coming. Recorded at Muscle Shoals , the album sounded great, thanks to producer Jerry Wexler and guitarist Mark Knopfler of Dire Straits. Neither knew that Dylan believed Jesus Christ visited his Tucson hotel room in November of 1978 and had then joined T Bone Burnett's Christian organization, the Vineyard Fellowship where he spent three straight months in bible study. He became convinced we were all living in the end times, telling audiences :

I told you 'The Times They Are A-Changin' ' and they did. I said the answer was 'Blowin' in the Wind' and it was. I'm telling you now Jesus is coming back, and He is! And there is no other way of salvation ... Jesus is coming back to set up His kingdom in Jerusalem for a thousand years."

Wexler would help Dylan win a Grammy for the single "Gotta Serve Somebody", but he wasn't ready to convert just to make a decent album.

"Naturally, I wanted to do the album in Muscle Shoals - as Bob did - but we decided to prep it in L.A., where Bob lived", recalled Wexler. "That's when I learned what the songs were about: born-again Christians in the old corral... I like the irony of Bob coming to me, the Wandering Jew, to get the Jesus feel... [But] I had no idea he was on this born-again Christian trip until he started to evangelize me. I said, 'Bob, you're dealing with a sixty-two-year-old confirmed Jewish atheist. I'm hopeless. Let's just make an album.'"

This is about as risky and radical a career move as any rock star could make, but Dylan had some critics on his side. Rolling Stone editor in chief Jann Wenner took it upon himself to review the album:

It takes only one listening to realize that Slow Train Coming (Columbia Records) is the best album Bob Dylan has made since The Basement Tapes (recorded with the Band in 1967 but not released until 1975). The more I hear the new album — at least fifty times since early July — the more I feel that it’s one of the finest records Dylan has ever made. In time, it is possible that it might even be considered his greatest.

Robert Christgau gave the album a  B+, noting the anger in Dylan's lyrics:


The lyrics are indifferently crafted, and while their one-dimensionality is winningly perverse at a time when his old fans will take any ambiguity they can get, it does serve to flaunt their theological wrongheadedness and occasional jingoism. Nevertheless, this is his best album since Blood on the Tracks. The singing is passionate and detailed, and the pros behind him--especially Mark Knopfler, who has a studio career in store--play so sharply that his anger gathers general relevance at its most vindictive. And so what if he's taken up with the God of Wrath? Since when have you been so crazy about the God of Love? Or any other species of hippie bullshit?

Slow Train Coming climbed the album charts all the way to #3, selling platinum. But Dylan followed it with two more albums featuring born again lyrics, but less interesting songs and production, audiences stopped buying what Bob was selling. With the exception of the Knopfler produced Infidels, the 80's would not be a good decade for Dylan.