Your Future's A Clam 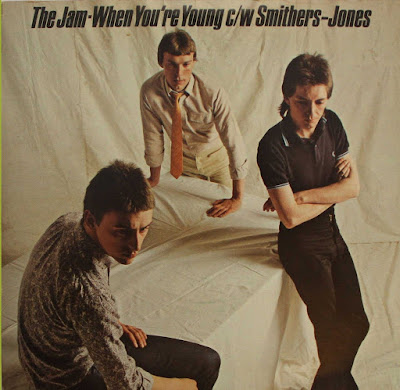 The Jam : When You're Young

On August 19,1979, The Jam entered the U.K. charts at #25 with their second stand alone single , "When You're Young" b/w the rock version of "Smithers-Jones". The A-side is a straight up Jam rocker. For the video, Weller breaks the news to a some freshly-scrubbed children that the world has "got you in its grip before your born/ It's done with the use of a dice and a board /They let you think you're king, but you're really a pawn", but still manages to get them to sing along at one point.

Steve Bush of Smash Hits was a fan of the new single, writing:

Now, this is better. The Jam aren't trying to be clever or trying to confuse us. Their familiar sound and distinctive vocals, great guitar, and the lyrics a little less contrived than usual. A biggie.

The gem of the 45 is the B side, Bruce Foxton's "Smither-Jones" might be his best contribution to The Jam. This is the version that should have appeared on Setting Sons instead of the orchestral version below.