There's a Party in My Mind 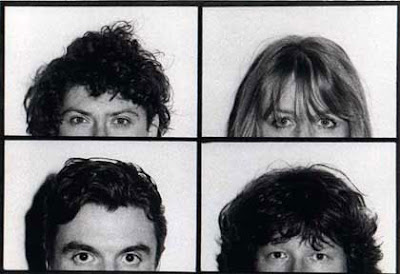 On August 3, 1979 Talking Heads released Fear of Music, the band's third album. With lines like "I know the animals are laughing at us" and "I got three passports, a couple of visas,/You don't even know my real name", this is the band's most paranoid album. Recorded in Chris and Tina's New York City loft and produced by Brian Eno, it's loaded with one word song titles ("Air", "Paper", "Heaven", "Drugs", "Cities") and a black embossed album cover designed by Jerry Harrison. The album finished 4th in the Village Voice Pazz + Jop Critics poll behind Graham Parker's  Squeezing Out Sparks , Neil Young's Rust Never Sleeps and The Clash's US release of their 1977 debut.

Time stands still when you're cracking up. At the brink of mental overload, there's a revelatory instant -- a frozen frame in which everything fits together in new ways. Logic dissolves, paralogic reigns. And in that precarious moment, the world is fixed in place, skewed and renewed.

David Byrne's lyrics on Talking Heads' Fear of Music are paralogical visions stated with almost childlike directness: he thinks that air hits him in the face, that animals want to change his life, that "someone controls electric guitar." By itself, this perspective makes Byrne's songs fascinating. But what makes Talking Heads my favorite and probably the best rock band anywhere is that they've invented an audio analog to their view from the brink: rock music that warps and suspends time.

They use a simple device: repetition. Unswerving rhythms, immobile harmonies. Each tune is a chain of sections linked by rhythm, each section a matrix of interlocking riffs. "I Zimbra" stakes Talking Heads' claim to pure mechanization. One by one, the instruments click into place in a rhythm pattern fleshed out by Afro-futurist harmonies and topped by the meaningless chanted syllables of a poem by Twenties Dadaist Hugo Ball. At composition's end, Robert Fripp's guitar phases through the whole pulsing assemblage like the shuttle of a high-speed loom.

From the A- review by Robert Christgau:

David Byrne's celebration of paranoia is a little obsessive, but like they say, that doesn't mean somebody isn't trying to get him. I just wish material as relatively expansive as "Found a Job" or "The Big Country" were available to open up the context a little; that way, a plausible prophecy like "Life During Wartime" might come off as cautionary realism instead of ending up in the nutball corner with self-referential fantasies like "Paper" and "Memories Can't Wait." And although I'm impressed with the gritty weirdness of the music, it is narrow--a little sweetening might help.

Novelist Jonathan Lethem wrote an in-depth exploration of the album for the 331/3 series. He told NPR how the album impacted him as a teen:

My father was a painter, and I was already an art student myself, and so all the frameworks that seemed to be surrounding this music — the self-conscious brandishing of neuroses and fear, the bookishness, the pretentions to the visual arts, the celebration and anxiety about New York City, the sneaky relationship to black polyrhythms and dance music, but putting kind of a gawky white face on top of that — all of this just made it like a magic trick, I identified with it so totally. It also had narrative elements and language elements, motifs that really mattered a lot to me. It seemed to be kind of dystopian — kind of about that weird way in which everyday life could feel also a bit like a paranoid future. That certain kinds of encroachments of technology, or political paranoia, or the undertow of devastation in the urban environment, all of these could combine to make you feel like you were living in a sort of science fiction novel. And it seemed to me that Fear of Music was saying the same thing about everyday life — that it was both the future and the present all at once, that it was supposed to be totally normal, made up of familiar stuff — "Paper" and "Air" and "Drugs" and "Animals" — but it still had this ominous overtone, that all of these things could seem charged. Like they were grievances, or like they were your enemy in some way simultaneously.