Lovely is the Feeling Now 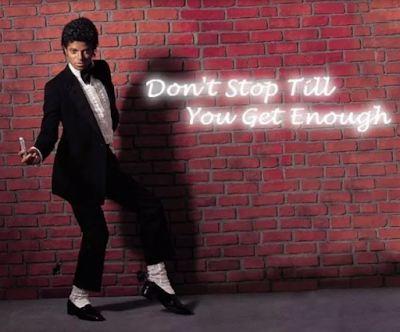 Michael Jackson : Don't Stop Till You Get Enough

On August 10, 1979 19 year old Michael Jackson released Off The Wall, just weeks after the release of "Don't Stop Till You Get Enough", the first single Jackson wrote himself and the first of his singles to hit #1 in the United States.

Jackson was in rehearsals for The Wiz when he asked Quincy Jones to recommend a producer who could help him score his first hit solo album since Ben. Jones suggested himself and brought in members of The Brothers Johnson and Rufus  to play on the  new album.  Another key ingredient is Heatwave songwriter Rod Temperton ( of "Boogie Nights" fame). In fact, if you listen to "Boogie Nights", you hear the entire blueprint of  Off the Wall. Songs that begin with atmosphere before suddenly lifting off with a funky bass line, repetitive backing vocals and a hook that will send the masses to the dance floor.

Now listen to the title track from Off the Wall:

Temperton also wrote "Rock With You" and "Burn This Disco Out". There are other songwriters involved of course. Paul McCartney's sugary "Girlfriend". Stevie Wonder's " I Can't Help It", Carole Bayer Sager and David Foster's "It's The Falling In Love" ( recorded way back in 1975). But the triumph belongs to Jackson who would sell 12 million copies of this album. Quincy Jones said " All my life I wanted to see an entertainer like Michael really do his thing with no limitations." Off the Wall is the result.

Labels: 1979, Don't Stop Till You Get Enough, Michael Jackson, Off The Wall