Not Just Another Slimy Bore 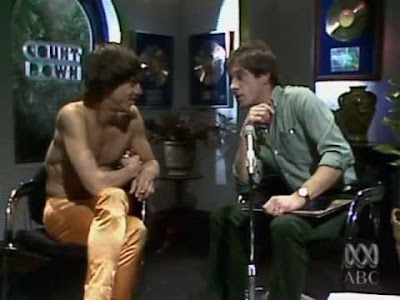 In the Summer of 1979 Iggy Pop made a memorable appearance on the Australian music show Countdown. Fresh off a flight across an ocean, a shirtless Pop appears glassy-eyed, playfully manic, and incapable of sitting in a chair or paying attention to "sensible questions" from host Molly Meldrum. As the program aired a video of David Bowie's "D.J.", Pop wandered off the set but he returned for an energetic lip-syncing performance of the New Values track "I'm Bored".

Many years later Pop would return to Australia where he was taped watching his performance."I coulda gone on there and spat at the guy or whatever. I didn't do that," he said.

Regarding the performance: "That's a pretty rocking song and it's hard to deliver a rock song solo like that. Harder when it's an audience that doesn't know what planet you landed in - from and wishes you'd go away and wants their daddy to get rid of you or whatever."