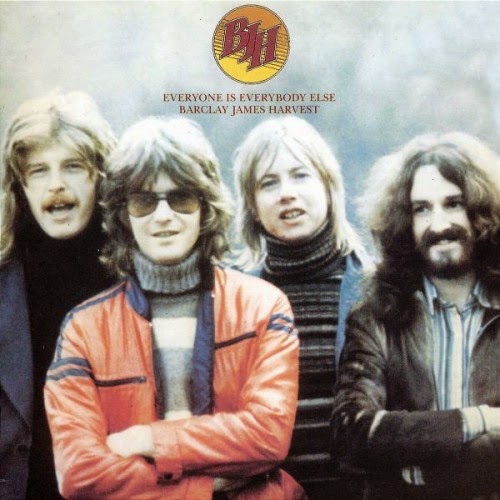 Considered by many to be their high point, Barclay James Harvest's Everyone is Everybody Else is highly accessible, highly melodic progressive pop that may remind listeners of a less silly, less successful Moody Blues. It is a sign of the band's playfulness that they would later record a song called "Poor Man's Moody Blues" as a result.

Originally signed to Harvest Records ( which took its name from the band), BJH moved to Polydor before releasing this album. Everyone is Everybody Else has a little something for everyone and everybody else: the lyrics offer direct and timely messages ( as in the opener "Child of the Universe": I'm a child of South Africa/ I'm a child of Vietnam /I'm a child of Northern Ireland/ I'm a small boy with blood on his hands), there's some well played mellotron ( from Stewart "Wooly" Wolstenholme), a tune that borrows from the Bee Gees ( "The Great 1974 Mining Disaster") and one that sounds like Crosby, Stills and Nash ("Poor Boy Blues").

The Germans embraced Barclay James Harvest but for the for most part, BJH never grew beyond cult status in the UK and US. This and the band's 1974 live album make a good case it was our fault for ignoring them.

Labels: 1974, Barclay James Harvest, Everyone is Everybody Else